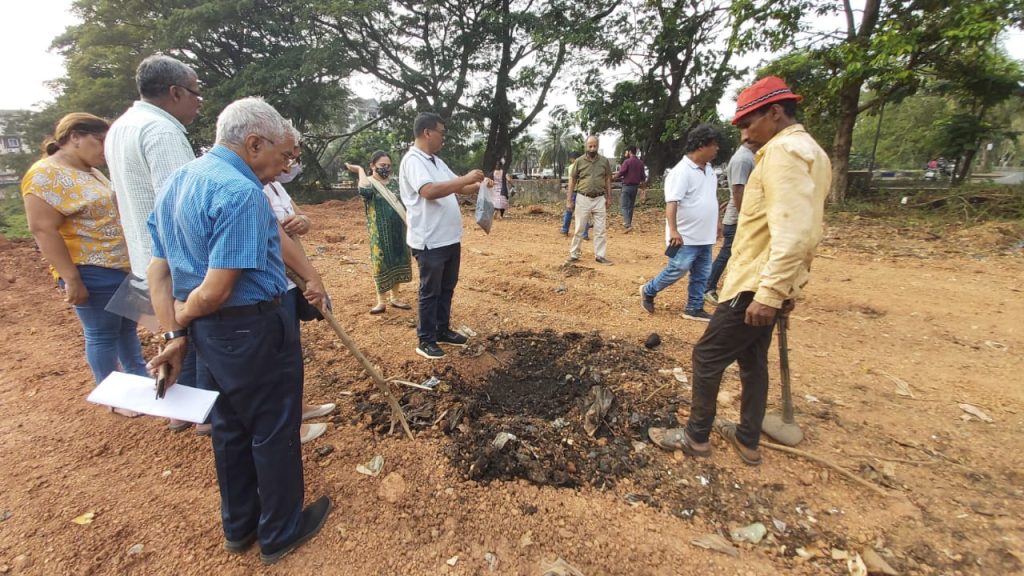 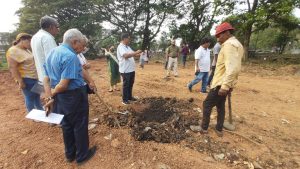 Goemkarponn desk
MARGAO: Based on the complaint filed by the Citizens of Margao/Fatorda, the Goa State Pollution Control Board officials inspected the dumping site near the District Court and collected samples of the waste dumped by the Goa Waste Management Corporation last fortnight.
It may be recalled that on 17th and 18th November, the Bio Remediation work Contractor engaged by the GWMC to treat the legacy waste at Sonsodo had dumped hundreds of truckloads of waste into the low-lying field near the District Collector.
This dumping of waste invited strong criticism from the public, with a protest being held at the site demanding action against the act on the part of the concerned authorities.
The unbearable stench from the dumped waste was spread up to nearly a 1-kilometre radius, and the citizens and general public, under the banner of the Shadow Council for Margao, took up the issue and filed complaints before the Goa State Pollution Control Board on 24th November demanding for testing of dumped waste.
SCM Convener Mr Savio Coutinho stated that “on 24th November, apart from filing a formal complaint, we had even handed over 3 samples of the dumped waste, with a request to tests/analysis to confirm the presence of pollutants/hazardous materials. As we dug up on 24th November to collect samples, we came across various types of unconfirmed waste, including huge chunks of plastics, which was proof enough to suggest that even the waste screening was not proper, leaving aside any treatment happening at Sonsodo, Coutinho stated further.
Two samples were collected at today’s sample collection carried out by GSPCB officials Samir Borkar and Nishta Lolyekar in the presence of GWMC and MMC officials. Articles like shoes, syringes, batteries and plastics were found, much to the shock of all.
Incidentally, milk packets of Goa Dairy were also found among the plastics, having the same rate of Rs. 13 printed on the packet. Coutinho, displaying the Goa Dairy milk packet, sought to know from the Margao MLA Digamber Kamat and the MD of GWMC, “if finding a milk packet at Sonsodo was described as successful Bio Remediation work, then what does finding a similar milk packet in the waste tagged Inert/Compost imply?”, he asks.
The citizens strongly demanded that a sincere test analysis should be conducted on the samples in the public’s interest. As a matter of abundant precaution, we have also collected a sample in the presence of the officials, which shall be given for test/analysis to a private lab, said.
Prominent citizens, including Adv. Snehal Onskar, Candeth Castello, Jose Maria Miranda, Maria do Carmo, Damodar Onskar, Zeferino Fernandes and others were also present at the inspection and sample collection.