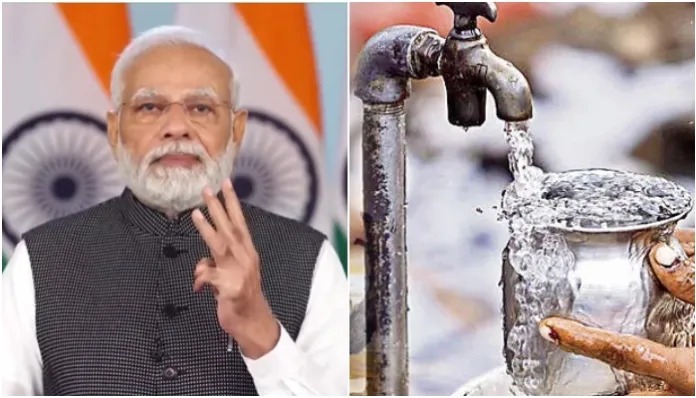 Goemkarponn desk
CANACONA – Stating the Centre allotted 100% Certification of Har Ghar Jal to Goa State is completely a farce, and far away from the ground reality, GPCC General Secretary Janardhan Bhandari blamed the Chief Minister Dr Pramod Sawant for making wrong claims and the Centre for the botched-up 100% certification to the State.
‘Barring Canacona municipality to a certain extent, none of the 7 village panchayats of Canacona have Tap connections in totality. Gaondongrim and Cotigao villages do not have 50% of their households with water taps facilities. Similar is the situation in the villages of Poinguinim, Loliem-Polem, Shrishthal, and Agonda and also, several households in Khola village do not have water taps. In fact, even the majority of the households who have obtained tap connections have not seen any water flowing through their pipelines ‘, claims Bhandari.
To prove his contention, Bhandari mentioned a few places in his parent village of Poinguinim, like Marlim-Tirval, Kharegal, Chiplem Badegal Khalshi Tirvonn, Kudal, Galiem and Khawat. Most of the houses do not have household Taps, and the few who have obtained tap connections have no water running in their taps. More than 50% of households in Cotigao and Gaondongrim do not have taps. Similarly, neither every nor all the households in the villages of Loliem-Polem, Shrishthal, Agonda and Khola have no water supply connections, and the few more, inspite of having water connection, have their taps dry and sundry ‘.
A tribal activist Devidas Gaonkar from Khotigao, laughing at the claims of 100% Certification on Har Ghar Jal in Goa, asked, ‘how the areas like Endrem, Keri, Nadkem, which do not even have proper electricity supply will have Water Supply Taps in their households?. These claims by the chief minister are total lies, and 100% certification by the Centre is very mischievous. Even the number of government tap connections obtained in many areas do not get Water-supply at-all in several localities of Khotigao. Where is Har Ghar Jal? Even the plastic taps provided to many people here have no water supply; what’s the use of Nal if there’s no Jal??
Some of the former Sarpanch of Khotigao, Gaondongrim, and Shrishthal when contacted, also agreed their villages are not 100 per cent complaint on water taps to households under the Jal Jeevan Mission.