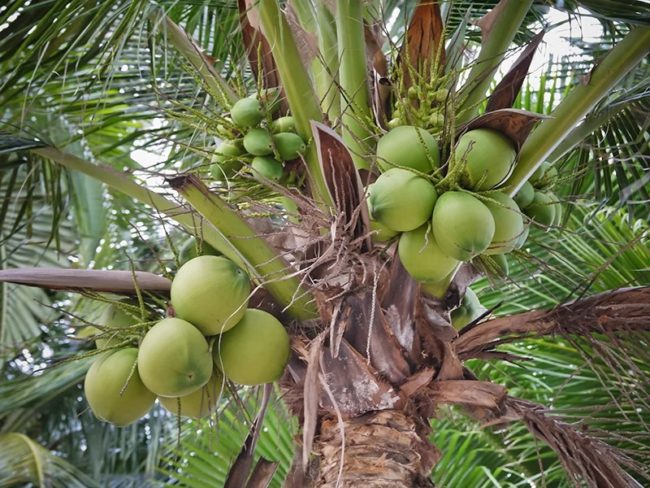 The steps to increase production….

* 75% assistance is provided on coconut area expansion. The limit of subsidy enhanced from Rs.30,000 to Rs.50,000/- per ha.
* Demonstration are laid out through Coconut Development Board to increase production and productivity of coconut.
* During 2018-19, 5 batches of 20 coconut pluckers were trained to facilitate coconut harvesting through Coconut Development Board.
* Assured price of Rs.12/- per nut is provided to the farmers.
* 75% and 90% assistance is provided on installation of Sprinkler and Drip irrigation system
* 50% assistance is provided on purchase of hybrid coconut seedlings
* During 2019-20 assistance will be provided for cutting and replanting of old/senile coconut trees with integrated nutrient management.
* Quality planting material is raised on departmental farms and provided to the farmers at a reasonable rate.
*50% subsidy is provided on purchase of organic manure, bio pesticides, bio fungicide and pheromone trap.
* Soil conditioner and micro manure is also provided to improve fertility of soil by providing 75% subsidy.

Goemkarponn desk
PANAJI: Once known as a leading grower of coconut in the country, Goa is now witnessing a surge in the prices of this commodity and a growing lack of interest among farmers to cultivate it.
A slew of factors, including the lack of manpower to plug the fruit and a lack of interest among farmers towards this crop, are responsible for coconut slowing going away from the reach of the common man in the coastal state.
Figures available with the state agriculture department indicate the tiny state has 25,700 hectares of its area covered under coconut groves. But the rising prices are making the nut unaffordable for most people.
A coconut is sold at Rs 40-50 in the local markets, forcing the state government to announce a scheme to subsidise it.
A farmer, Santosh Gaonkar, says multiple factors have contributed to the price rise, including attacks by pests like the Eriophyid mites which have affected plantations.
“Attacks by mites have been affecting the crop for the last 10-12 years. But this is not the only factor,” said Gaonkar.
He said farmers who face shortage of pluckers approach traders to take away their tender coconuts. “These traders come with pluckers and provide a good rate for the tender nuts,” Mhambrey added.
The burgeoning tourism industry has increased the demand for tender coconuts in the markets, especially in the coastal belt.
Mhambrey said if farmers don’t sell the tender coconuts to traders, they usually get a raw deal for their product – around Rs 5-10 per nut, depending on its size.
Agriculture Minister Babu Kavlekar says the Government is aware of the fact that the coconut production in the State has been reducing to some extent due to lack of care as a result of low wholesale rates prevailing during past few years (except for the period of September, 2017 to March, 2018) making cultivation less remunerative.
“In addition other factors such as increased wages of farm labour, scarcity of skilled labour (coconut pluckers), increased cost of fertilizers/manures, damage due to monkeys and pests such as Eriophyid mite have been hindrance in achieving optimum productivity of coconut gardens,” he said.
He said the Government is supplying organic/semi-organic/Bio-organic manure and bio-pesticide for coconut plantation for a minimum area of 0.1 Ha with 16 nos of bearing coconut trees under State Sector Scheme–Productivity Improvement in Coconut Garden. Assistance is also provided to farmers having minimum area of 0.2 Ha with 32 bearing coconut trees under Central Sector Coconut Development Board Scheme- “Laying Out of Demonstration Plots”.(LODP)
“The Department has brought in hybrid coconut seedlings from other State in co-ordination with Coconut Development Board (CDB), since the seedlings from private nurseries are sold at relatively higher rates. The hybrid seedlings procured through CDB are sold to the farmers at rates lower than those prevailing at present in the State,” he said.