In a accident at Cortali, pillion rider Grishma Desai was declared brought dead at GMC 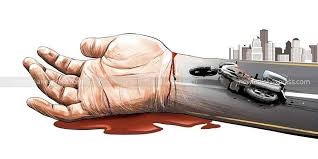 VERNA: Verna police arrested a Karnataka native and seized his four-wheeler in the fatal accident case in which a pillion rider lost his life at Verna.
As per the information given by the Verna police, on 13.03.2022 at about 19.00 Hrs or so at opposite Cortalim cross a person proceeding from Cortalim junction towards Verna direction reportedly drove his Maruti Suzuki Swift Dzire, white colour taxi (GA06 T 5945) in a rash and negligent manner without taking proper care and precaution and further dashed a Bajaj Discover bike (GAO6 B 6699) from behind thus causing fall of the rider namely Govind Desai (57) and a pillion rider Grishma Desai (52) resident of Gosavi Wadda,
Ponda, Goa, thus causing them grievous injuries.
Verna police further informed that the rider was shifted to Goa Medical College hospital by 108 Ambulance.
However, pillion rider Grishma Desai has been declared brought dead at Hospicio Hospital Margao. PSI Shridhar Kamat informed that Verna Police have registered an offence under section 279, 338, 304-A IPC against the driver Yalagurdappa Kunnur (26), a native of Bagalkot, Karnataka and has arrested him, and the vehicle has been seized by the Verna police.

Goemkarponn desk PANAJI: Bank of India (BOI) Campal Branch has been temporarily closed after several staff tested positive for COVID virus. “As some of our ... Read More

Goemkarponn desk CANACONA: A big group of Non-Goan women involved in rag-picking scanned and collected all rags, plastic, non-biodegradable waste from the Agonda and nearby ... Read More