Locals demand removal of rumblers on NH66 due to frequent mishaps 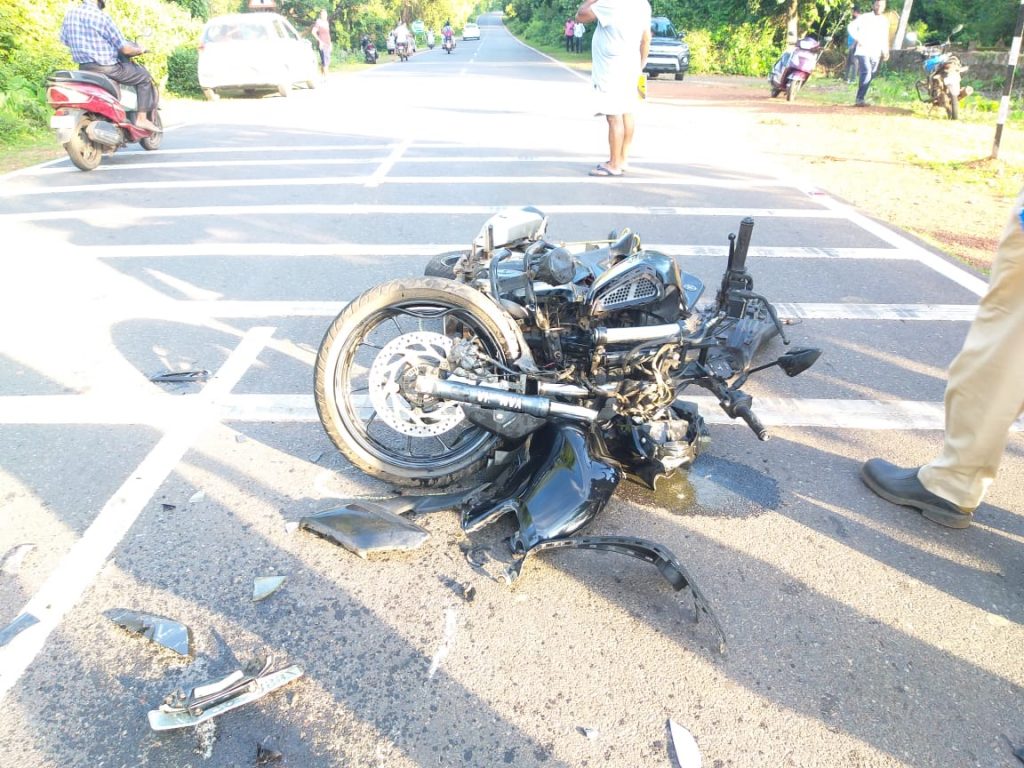 Goemkarponn desk
CANACONA – Stating Spead-breaker/Rumblers are not permitted on Highways and are more responsible for several mishaps, residents of Canacona are up in arms against the PWD for immediate removal of all such hindrances on NH-66.
The demand virtually grew louder after a biker was injured as a Karwar-bound Karnataka Registered Car dashed against a Kerala Registration motorbike at Dapot-Maxem on Saturday evening.
As the mishap took place just across the rumblers on NH-66 road near the S S Angle Hr Sec School Dapot-Maxem Bus-Stop, several residents reached to help the injured two-wheeler rider vent their anger on the PWD officials for erecting the rumblers, without any need of the same.
According to sources, a Car bearing registration no.KA-66 M-4390 coming from Margao was proceeding to Karwar. While overtaking a scooter going in front of the Car, which (scooter) incidentally slowed down on reaching the rumblers, forced the racing Car to swirl the Car to the right-hand side, eventually coming in the way of a Motorbike coming in the opposite direction from Karwar.
The Car hit head-on against the motorcycle bearing registration no. KL-79 3687, and the rider was thrown down, suffering injuries, while the motorcycle was badly damaged and almost got mutilated.
The Car was also had its bonnet damaged in the mishap.
After the conduct of Panchanama, locals themselves lifted the badly mutilated motorcycle and shifted it across the road in the presence of policemen.
Incidentally, the rumblers on NH-66
near S S Angle Hr Sec School, Dapot-Maxem came in for sharp criticism from the public. Explaining the cause of the accident, a resident said, “The Car was attempting to overtake a scooter in front of him, which got slowed down at the rumblers, but the overtaking Car jumped on the rumblers and swirled to the right, and hit the motorcycle coming in the opposite direction.”
“The rumblers are the cause of this and many mishaps on NH -66 road in the Canacona section. One cannot simply erect speed-breakers or Rumblers on a Highway road, don’t know why they have put these Rumblers there without any reason. We know Spead- breakers can be erected only on internal roads,” said a local Sidhesh Prabhudessai.
Another resident and a social activist, Santan Da Costa, said, “In the past, we got the Spead-breakers which were erected at this location removed, but without even informing and without anybody’s knowledge, they (PWD) have again put up these rumblers here. The accident at Dapot-Maxem is purely and solely because of these rumblers, and the rider is badly injured. We, that’s why, demand that whoever is the authority who has erected these rumblers without intimation or anyone’s request should remove them at the earliest possible, as these rumblers are an obstruction on Highway.”
He said these rumblers are total obstruction to the smooth flow of highway traffic, and this obstruction should be cleared as soon as possible to avoid the recurrence of similar mishaps.