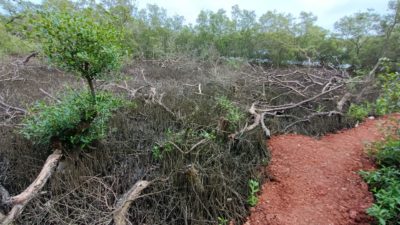 PANAJI: Former Corporation of City of Panaji (CCP) Corporator Menino D’Cruz today has filed a complaint against a builder for destroying mangroves in Bhatlem.

“2 days back i saw some patches in the opposite side from my flat and when i visited spot it was seen that around 50-60 mangroves were cut for some bandh construction without any permission,” said D’cruz

He further said that he has filed a compalint against the said builder with the forest department.

“The panchayat and the local ward members have turned a blind eye and is probably is in hand in glow with this illegal activity. Such acts damages the natural balance and there is great likelihood of soil erosion,” he added

“Such acts across Goa has already damaged the environment and the people carrying out this act should be immediately stopped and legal actions should be initiated against the same.

D’cruz said that he was sure that no permissions from the Forest department has been acquired for the said act of cutting the mangroves.

“I request the forest department to take immediate steps to stop this illegal construction at once. I also request to initiate criminal actions against the above builder,” he added

Goemkarponn desk QUEPEM: In a bid to give respite to the people of Quepem taluka who have to travel all the way to Margao for ... Read More

Porvorim: State of the art crematorium at Porvorim was partially opened today for its operations by local MLA Rohan Khaunte, who said that the facility ... Read More

NEWER POSTWhy should Sportspersons be deprived of training facilities for ELECTIONS?
OLDER POSTHeart patient dies in collision between ambulance & truck at Bambolim