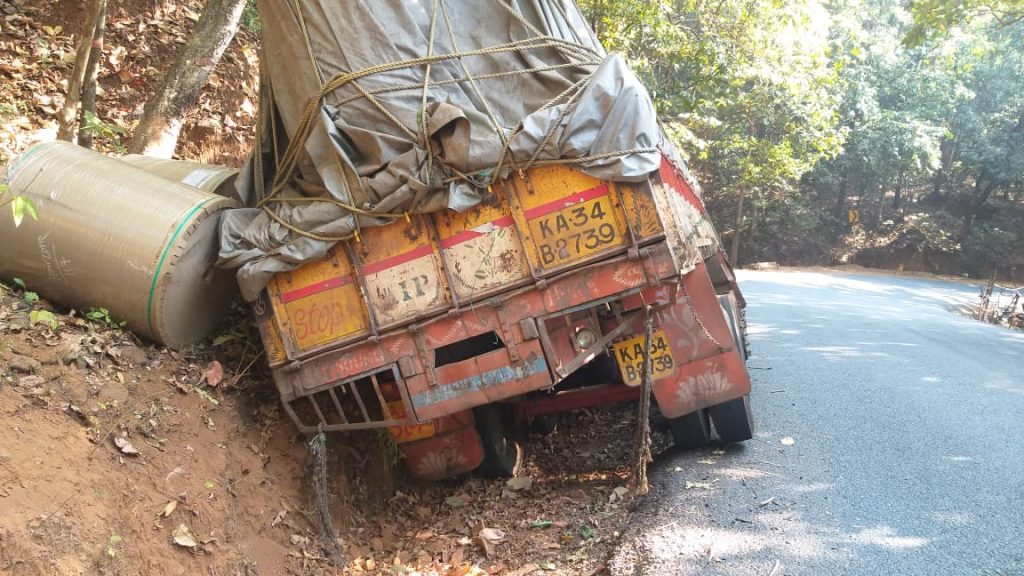 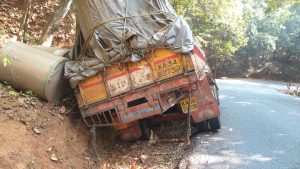 Goemkarponn desk
CANACONA: Almost after a gap of more than two months, Karmalghat is back in the news as an Inter-State Truck got stuck into the roadside trench early Monday.
According to sources, a loaded truck with Karnataka Registration bearing no. KA- 34 B-2739 was headed towards Karwar, fell off the highway road after its left side wheels went down the trench, and its body rested o the mountain walls.
The loaded goods, reportedly print materials, also fell on its left side but rested on the hill section.
The incident reportedly occurred past Sunday midnight/in the wee hours of Monday.
Luckily no Highway’ traffic was disrupted as the truck came with its left front and rear wheels getting stuck in the trench below, and the whole truck came to rest on the extreme left of the road.
The driver and cleaner are reported safe and sound.
It may be recalled that frequent mishaps involving mostly Inter-State transportation got the government authorities scurrying for repair and widening of the narrow Karmalghat section, with several authorities carrying out an inspection of the highway, as well as sending Central road ministry In a frenzy to arrive at some decisions.
It is also learnt a section of the Karmalghat Highway’ is taken up for widening and repairs, but no moves are afoot to remove the death traps, particularly the stiff edges which catch much Inter-State traffic off guard at the treacherous curves and turns.