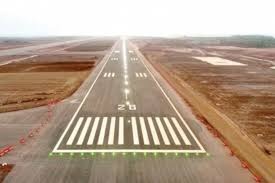 Goemkarponn desk
PANAJI: Chief Minister Pramod Sawant today hinted that Mopa International Airport might be inaugurated next month.
Chief Minister Pramod Sawant today attended the Canso Asia Pacific Conference in the capital in the presence of MoS Civil Aviation General V.K. Singh and other stakeholders from the aviation sector.
“Hosting the CANSO Asia Pacific conference in Goa is of utmost importance. Decisions on the inauguration of Mopa airport can be taken during the various scheduled meetings. Mopa airport maybe opens next month,’ said CM Sawant.
He further said that different issues in the aviation sector will be discussed at the Canso Asia Pacific Conference.
During his address, Sawant said that airports are the economic gateway and the state of Goa assures that it will effectively improve the multi-modal connectivity to apply support for aviation infrastructure in the state.
“November 2022 is a milestone in the civil aviation sector for Goa. On 26 October, DGCA issued the aerodrome license for public use category st Mopa Airport,” he said.
Sawant added that Goa is a great example of a Civil-Military corporation; Dabolim airport is a jointly used aerodrome owned by the Indian Navy and also opened for Public Use.
“We are in the process of operationalising Mopa Airport soon; it will be a feather in the cap for Goa,” he added.
The Mopa airport is being constructed in four phases, with an annual passenger capacity of 4.4 million in phase I, which will increase to 5.8 million in phase II and eventually to 13.1 million passengers per annum when phase IV is completed.
GAL’s subsidiary GMR Goa International Airport is developing the project, which is based on a design, build, finance, operate and transfer (DBFOT) basis.
In September, the operator completed the landing trials for both approaches – 10 and 28 – of the newly-built runway.