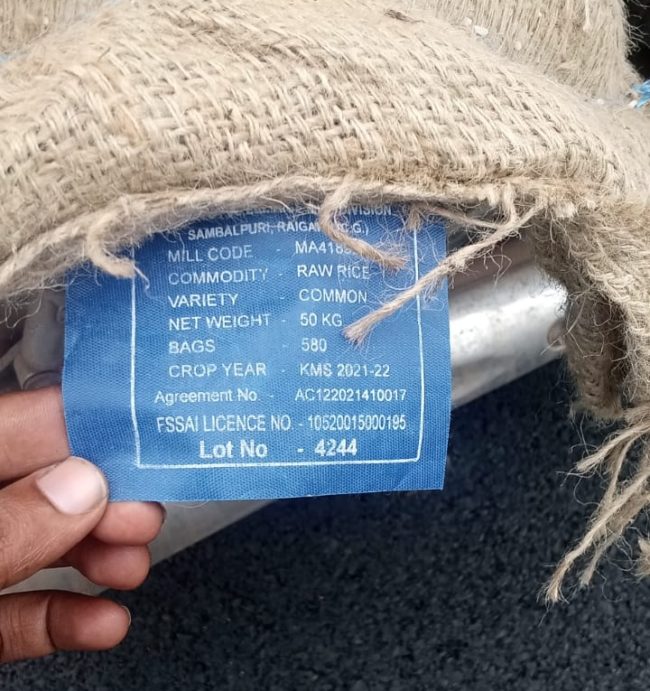 VASCO: Vasco-based NGO smells a rat in the functioning of the Civil Supplies office in Vasco. Goa First NGO alleges “black marketing” of food grain stocks and the involvement of the department employees.
Goa First demands the Director of Civil Supplies department to take cognisance of the matter for the larger public good.
Last year, malpractice in the Vasco Civil Supplies office was exposed by Goa First, wherein a person was caught purchasing a rice grain bag in black from this office. From then on, not much seems to have changed for the good.
The alleged black marketing in this Vasco Civil Supplies office continues, alleged Goa Firsts’ Parshuram Sonurlekar.
Goa First NGO has filed a complaint against the Officer in Incharge of the Department of Civil Supplies and Consumer Affairs, Mormugao and the fair shopkeeper of Mormugao Municipal jurisdiction for their alleged involvement in selling food grain bags in the black market.
In their press note, Goa First NGO has stated that “earlier we had filed a similar complaint against a fair shopkeeper from Desterro Vado on 06/12/2021 where we had caught the person buying food grain worth 100kg, and he confessed on the video which had gone viral on social media that he had purchased the food grain from the fair shop only to sell in the black market. After the video went viral, the civil supplies department acted and bought the sold food grain back to the fair shop. Still there is no action on the fair shopkeeper”.
“We Goa first kept a watchful eye in the Civil supplies department and caught many people buying such huge stock illegally from the shopkeeper, yesterday on 13/06/2022 again we saw a person carrying such food grain from the fair shop.
We strongly believe that the department is hand in gloves with the fair shopkeeper, and with their blessings, this business is flourishing.
Goa First had demanded an earlier monthly audit on this fair shop, but nothing has happened to date.
Both the central and state governments spend massive taxpayer money on this subsidised food grain, so the needy get the food at a cheaper rate but the department officials who strive on the commission of the fair shopkeeper and black marketing agents don’t act upon it.
Goa First urged the Director of civil supplies to look into this matter and the Mamlatdar of Mormugao, who is also a nodal officer, to suspend the departmental head of Mormugao on an urgent basis and also request them to increase the monthly ration of APL card holders from 8-9 kgs to 15-20 kgs.
When contacted, Joint. Mamlatdar Vasco Ranjeet Salgaonkar asked about this complaint; he said that so far, he has not received any such complaint. But he assured me that once he gets this complaint, he will do the procedure and act on this matter.