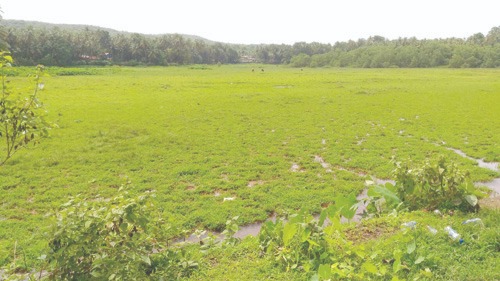 PANAJI: The Comptroller and Auditor General of India (CAG) in its report said that non-development of fallow land and non-functioning Command Area Development Board led to poor agricultural development in the state.

“Non-development of fallow land and non-functioning Command Area Development Board led to poor agricultural development; as a result mangroves and weeds were growing on fallow lands affecting the land holdings which were being cultivated,” said CAG

It further said that the farmers were unable to use mechanised farming on account of the fallow land surrounding their farm holdings as observed during the survey of farmers conducted by audit team (January-February 2020).

“The State had observed (2012) that some areas within the command area were lying fallow which had to be brought under effective cultivation. Audit observed that the WRD had not made any attempt to identify and develop the fallow land areas till date (July 2021),” the report states

Further, the Goa Command Area Development Act, 1997 allowed imposition of fine and recovery of water charges if the land-holder failed to cultivate the fallow land for a period of two consecutive years.

CAG said that the Command Area Development Board was required to prepare annual report of its activities under the CAD Act, 1997 and submit it to the Government in such form on or before such date as may be prescribed to be laid before the House of the Legislature. The Command Area Development Board had not functioned during the period 2014-20, reasons for which were not furnished by WRD, though sought by Audit.

“It was observed that even at the time when it functioned (between 1981 and 2013), it never prepared such report indicating that the mechanism to update the State on the progress of command area development was never set in motion,” the report mentions

CAG said that due to shortcomings in the execution of the policies and regulations by the State departments, the agricultural activity had remained confined to just 1,619 ha. out of CCA of 9,686 ha.

“The WRD stated (July 2021) that farmers and officers of the Department would be imparted training in best agricultural practices and scientific methods to improve the farm productivity,” CAG report states