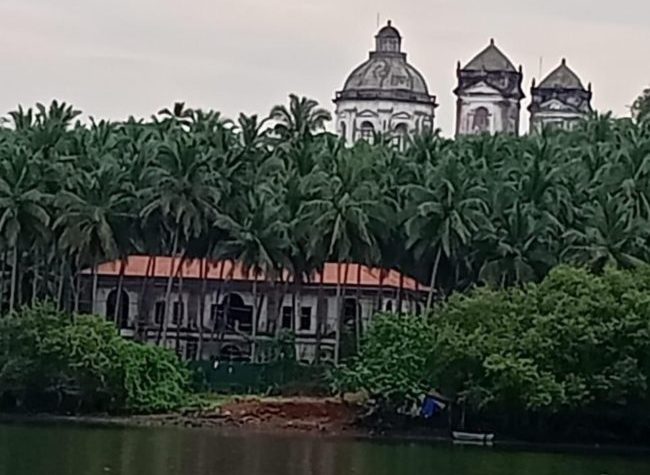 PANAJI: The protest against the construction of an allegedly illegal bungalow in Old Goa’s heritage precinct completed 200 days on Sunday and protestors, including citizens from all over Goa, demanded that the structure be demolished.
The village panchayat of Se Old Goa had, in January, issued a showcause notice to the owner of the bungalow in Ella village, which has been at the centre of a citizen-led protest that gathered momentum in November 2021. In the showcause notice, Sumerlal Jain of Corus Urban Infrastructure Limited, a Mumbai-based construction firm, had been asked to cite reasons for why the structure should not be demolished.
Part of the movement seeking demolition of the structure, architect Tahir Noronha said: “The village panchayat had issued a demotion order, the builders have now challenged it before the additional director of panchayats.”
The Save Old Goa Action Committee (SOGAC) had been protesting against the construction of the bungalow for over a year and had also filed a petition in the Supreme Court. The protests intensified after over 3,000 people gathered at St Cajetan Church in Old Goa on November 21, 2021, demanding that the government take action against the allegedly illegal structure.
The ground-plus-one structure with a tiled roof stands between the Mandovi river and St Cajetan Church and is located close to the Viceroy’s Arch in Old Goa’s heritage precinct. The protest has been ongoing near the St Cajetan Church, behind which the contentious structure stands.
On Sunday Goa Pradesh Congress Committee (GPCC) President Amit Patkar, Congress leader and environmental activist Viriato Fernandes and Congress MLA Rudolfo Fernandes came to the protest site in solidarity with the protestors.
“The TCP (town and country planning) minister is now very aggressive. That’s good but it should have started with Goa. The TCP minister is taking suo motu cases and saying he will demolish illegal structures. It should have started from Old Goa,” said Patkar.
Earlier TCP Minister Vishwajit Rane had said that he would ensure that illegal construction inside two hotels in which Leader of Opposition Micheal Lobo has stakes are demolished. “Our MLAs will take up this matter (Old Goa) in the assembly session,” said Patkar.
In 2015, the owner of the land Jose Maria de Gouveia Pinto sold 2400 sq m of the land to Survarna Lotlikar, wife of former Goa Forward Party treasurer Suraj Lotlikar and 9,500 sq m to Manish Munot, husband of BJP Spokesperson Shaina NC in 2015.
Subsequently, Munot said that he had pulled out of the project and sold his part. The land changed hands in August 2021 through a sale deed in the name of Corus Urban Infrastructure Limited. Earlier, a stop-work order was issued by the panchayat to Pinto, Suvarna Lotlikar, and Sumerlal Jain of Corus Urban Infrastructure.
Both Shaina NC and Manish Munot had said they had nothing to do with the alleged illegalities. However, protestors accused the ruling BJP of bending rules to allow the allegedly illegal construction at the behest of Mumbai-based Shaina NC.
Clara Vaz, a resident of Aldona, drove down to Old Goa on Sunday to be a part of the protest to mark its 200 days. “I came because I love our heritage and I love Goa,” she said.