*HC has order trial court to expedite hearing in the case 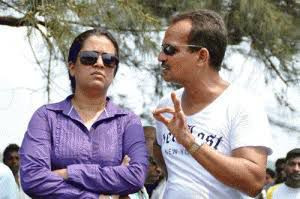 PANAJI: In a major setback to Minister Jennifer Monserratte and her MLA husband Atanasio ‘Babush’, the Bombay High Court at Goa today dismissed their plea seeking to quash and set aside the charges framed against them by CBI in the infamous Panaji police station attack case.

Justice Manish Paitale also directed the trial court to expedite proceedings against all the 36 accused in the 2008 police station case.

The husband wife duo were among 36 who had filed petition before High Court in 2014 seeking quashing of the criminal proceedings against them.

“HC today has rejected the applications filed by the accused in the 2008 Panaji Police Station Attack Case. The court has directed the special court to expedite the trail as there was prima facie evidence against the accused. Babush and Jennifer are the main accused in this case,” said Advocate Aires Rodrigues

He further said that a request was made by the advocates of Monserrate to stay this order for four weeks so that they could approach the Supreme Court of India but the HC declined the request noting that cases against politicians needs to be fast tracked.

“Now the trial will start and i will be moving the lower court to seek to assist the prosecution in view of fact that Jennifer and Babush are poliyically well connected,” he added

The verdict comes two months before State is set to go for polls with sitting MLAs- Monserratte couple gearing up to contest upcoming 2022 election.

Also one of the accused Tony Fernandes, is declared as Congress candidate from Taleigao.

The designated Special Court, Mapusa, had earlier this month, said that the proceedings in the case will be taken up only after the High Court verdict.

Justice Manish Paitale had on November 29, concluded hearing arguments in the plea and had reserved his verdict on the petition filed by the accused in 2014 seeking quashing of the criminal proceedings against them.

CM Sawant says will follow up Ivermectin issue with DHS

Goemkarponn Desk PANAJI: Chief Minister Dr Pramod Sawant today said that he will follow up the issue of purchase of ivermectin tablets with the health ... Read More

GMPF urges newly-elected MLAs to work towards resumption of mining

NEWER POSTOPINION: Dear TMC’s Didi, Goan politicians may be up for SALE, GOANS ARE NOT
OLDER POSTCrime rate in Goa has come down by 101 per cent: Nadda