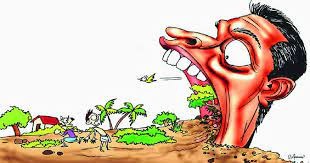 Goemkarponn desk
PANAJI: Political links in cases of land grab, most of which are in Goa’s coastal belt, are being examined by a Special Investigation Team (SIT) set up by the state government, Goa Inspector General of Police (IGP) Omvir Singh Bishnoi said on Friday.
Bishnoi said that the team that has so far made 15 arrests in all, has landed a “big catch” with the arrest of three accused — Rajkumar Maithi, Royson Rodrigues and Sandric Fernandes.
Asked if any politicians were involved in cases of land grab, he said, “Right now we have a confession statement of an accused. We are examining that part. Yes, they have named some politicians but before we arrest them, I will not name them.”
He said that most of the 95 cases that are under the SIT’s scanner were in areas of Anjuna, Assagao, Badem, Calangute, Mapusa, Nerul, Parra and Reis Magos in North Goa and some from Vasco and Margao in South Goa. “The cases are mostly from coastal areas where the value of land is higher,” Bishnoi said.