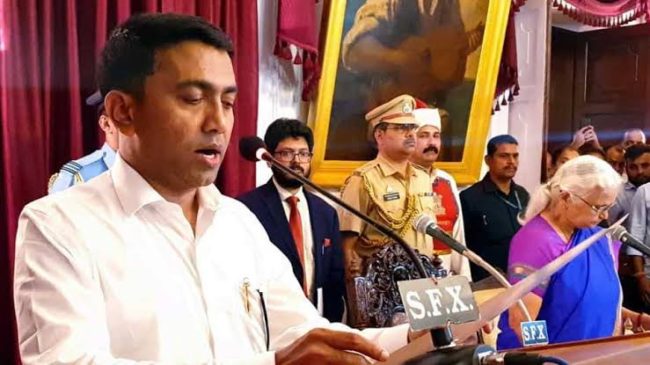 Sawant took over as chief minister following the death of Manohar Parrikar.

A two-time MLA who started as a karyakarta, Sawant steadily rose in rank and profile. While he has no political lineage, he is considered to have the backing of the RSS.

Taking it to social media platforms, CM Sawant expressed his heartfelt thanks to the loving people for placing in trust him.

“Today as I complete 2 years as the Chief Minister of the state of Goa, I wish to express my heartfelt thanks to the loving people who have placed their trust in me,” said CM Sawant

Sawant also said he was deeply honoured with the support that he felt through a difficult phase of pandemic to make Goa strong again.

He said, “I truly appreciate everyone’s efforts and commitments to make this journey a beautiful one. With your continued trust,”

Sawant on this occasion also promised the people of Goa that he will work tirelessly towards making Goa Swayampurna and address every challenge that comes his way.

Dr. Pramod Sawant had taken oath as chief minister of Goa. The 45-year-old MLA from Sanquelim constituency took charge of the office, hours after the final rites of his predecessor, Manohar Parrikar, were conducted with full state honours.

He was sworn in after a marathon session of hectic negotiations anchored by Union Minister Nitin Gadkari and BJP national president Amit Shah, who over a series of meetings, spanning more than 24 hours, with legislators from regional parties and independent MLAs forged a coalition together