Preventive measures for floods in Bicholim 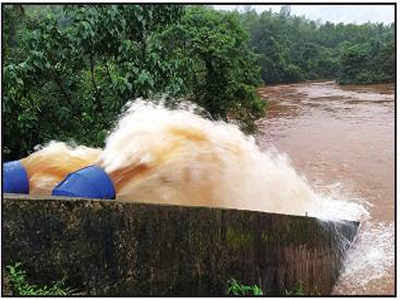 Goemkarponn desk
BICHOLIM: The officials seem to have taken the matter of annual floods in Bicholim taluka seriously as already the Bicholim Mamletdar has started convening meeting to avoid the same.

Bicholim mamletdar, Pravinjay Pandit has directed the officials to undertake several preventive measures so as to avoid any untoward incident because of mining pits.

Such has been the steadfastness that the
The mamletdar informed that there will be site inspection of Shirgao and Poira mines on 10th May and told all the officials to be present. He also directed the AE of WRD to coordinate with his counterpart at Tillari dam in order to put all mechanisms in place to prevent any flood like situation in Sal village during the monsoon.

WRD assistant engineer, K P Naik informed that all the mechanisms to pump-out water from mining pits are in place and he is monitoring the situation round the clock.

The AE informed that he would submit a proposal to the chief engineer with respect to the Tillari in order to prevent flood like situation in Sal and other adjacent villages in the taluka.