Quepem’s residents pledge their support to AAP with Rozgar Yatra 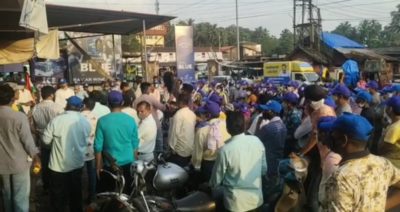 Quepem came out to support The Aam Aadmi Party’s ‘Rozgar Yatra’ today. The Yatra was very well received in Quepem and was led by Raul Pereira, Quepem Assembly Incharge and Joint Secretary AAP Goa and Patricia Fernandes AAP Women’s wing president. 100s of volunteers of the party in Quepem took part in the Rozgar Yatra.  This was followed by booth level meetings and 100s of residents attended.

The meetings were attended by large number of residents who were angry with the present Govt. Unemployment is a huge issue in Quepem. Youth are unable to get jobs. The residents of Quepem feel that the Govt has not paid enough attention to their youth in getting them Govt jobs or private jobs. Residents are excited about Kejriwal’s promise of 80% reservation or Goans in Private jobs. Youth are also looking forward to the Skill University as promised by Arvind Kejriwal so that they can compete with world class skills.
Arvind Kejriwal in his visit to Goa last month had announced his guarantee of providing employment to every youth when the Aam Aadmi Party government is formed in the state. He had promised that every youth will be given employment and Rs 3,000 per month till the employment is provided. Kejriwal announced that 80 percent of jobs in the private sector will be reserved for the youth of Goa. Rs 5,000 would be provided monthly to families who lost employment due to shutdown of tourism and mining. AAP Government will further establish a Skill University in Goa on the lines of Delhi’s DSEU. AAP will bring an end to nepotism in government jobs in Goa and the jobs will be made available to the common man

“Arvind Kejriwal’s promise to the Goans can be realized. Kejriwal said that every youth will be given employment after the formation of the AAP government and till the employment is not provided, every family will be given Rs 3,000 per month. He announced that 80 percent of jobs in the private sector will be reserved for the youth of Goa. These are why the youth and residents of Quepem are flocking to us in large numbers”’, said Raul Pereira, Quepem Assembly Incharge.
Patricia Fernandes, AAP Women’s Wing President,said ‘In order to combat the present situation of joblessness, Arivnd Kejriwal has planned that AAP will establish a Skill University on the lines of Delhi’s DSEU. This will greatly help the youth in getting jobs. Youth trust him because Arvind Kejriwal is a person who does what he says.”

AAP announces second list of candidates ahead of elections

Goemkarponn desk PANAJI: Shiv Sena Leader and MP Sanjay Raut today announced that it will shut down casinos in the state once they form the ... Read More

Black Day for women in Mormugao , SC will do justice to women: Shraddha