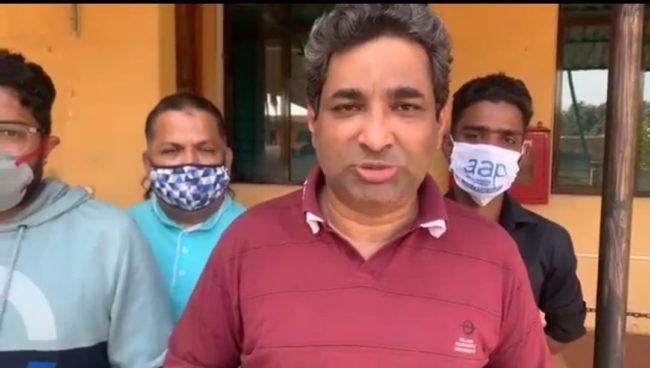 Earlier AAP leader Adv. Amit Palekar exposed a major job scam in the health sector by claiming that 95 percent of jobs were given to people from CM Pramod Sawant’s Sakhali constituency and Health Minister Vishwajeet Rane’s Sattari constituency. Palekar has also alleged that no process had been followed during their recruitment and that people had been appointed before appointment letters were issued.

While addressing the media on Sunday Mhambre said, “Around 300 candidates showed up at Mapusa district hospital to collect fitness certificates for the jobs in the health department. Interestingly, all 300 candidates were from the Health Minister Vishwajeet Rane’s constituency. This is another example of job scams in the health sector”.

“Despite unemployment being a major issue in the Mapusa constituency, Mapusa MLA Joshua D’souza never paid attention to it. He should have raised his voice against such practices as a Mapusa MLA”, he said.

“It is wrong that government jobs are being given to people from the particular constituency. This problem should be addressed by CM Sawant, Mapusa MLA and the BJP. On one hand, the BJP touts ‘Sabka saath, sabka vikas’, while on the other hand, their own ministers are giving jobs to specific people”, he added.

He further said, “It is time for a change, and that is why voters ought to give the AAP a chance. The AAP has promised 80 percent reservation for locals in the private sector, employment to every household, and unemployment allowance until the unemployed get hired”.

Goemkarponn desk PANAJI: The Aam Aadmi Party has attacked the BJP Government’s recent decisions regarding pre-primary and primary schools, calling them an attempt by the ... Read More

AAP becoming the voice of every Goenkar: Mahadev Nai

Probe conspiracy angle in posting insulting tweet on Chatrapati Shivaji to give back door entry to PR agency in tourism department – Amarnath Panjikar.

Panaji: The tweet of the Tourism Department terming Maratha Ruler Chatrapati Shivaji Maharaj as “Invader” was a deliberate Conspiracy to give back door entry to ... Read More

NEWER POSTOne Russian National arrested with possession of narcotics drugs
OLDER POST72K children to be vaccinated in next 3-4 days: Rane