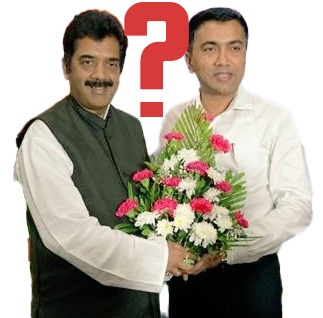 Goemkarponn desk
PANAJI: In view of the forthcoming elections, teh State government has announced an employment bonanza with 10,000 jobs in various government departments, but only a few have been advertised till now.
Even in those jobs announced so far, there are massive irregularities reported. Three such cases have come to the fore so far.
Shailendra Velingkar, leader of Parshuram Senaclaims to have unearthed a major scam in job recruitments in teh Economic Development Corporation (EDC), headed by BJP State chief Sadanand Shet Tanawade and Goa State Infrastructure Development Corporation (GSIDC), led by Chief Minister Dr Pramod Sawant himself.
In the first case, Velingkar citing a letter from a candidate, says that the EDC chairman Tanawade has recruited his personal driver for the post of Attendant cum driver in the Corporation.
While the written exam for the post was held on July 23, 2021, Velingkar alleges that the EDC chairman and also teh Managing Director asked the exam conductor one, Mr Sardesai, to re-conduct the paper for the Tanawade’s driver – Sandip Tulaskar, on August 5. Now, Tulaskar is all set to get his appointment letter soon.
In another case of GSIDC, led by CM, one Vipin Makwana has been appointed as the Human Resources Manager.
Shockingly Makwana was Dy General Manager in EDC and had retired.
The appointment was made after a resolution at the 175th meeting headed by CM Sawant and Mapusa ML Joshua D’Souza.
Information reveals that as per the approval granted, one post of Manager (HR) was created.
However, the Board was informed that GSIDC has not formulated any Recruitment Rules for the said post and further proposed redesigning the said post to Manager (Human Resources & Administration) considering the duties attached to the HR post.
The Current consolidate salary for the post will be Rs. 78,800.00 per month. The Board took note of the same and decided to appoint Vipin L. Makwana, retired Dy. General Manager of Economic Development Corporation (who had worked in GSIDC earlier on deputation basis) on Contract basis at the monthly remuneration of Rs.78,800.00 per month for one year and after detailed deliberation passed the following resolution unanimously:
“RESOLVED FURTHER THAT Shri Vipin L. Makwana retired Dy. General Manager of Economic Development Corporation be appointed as the Manager (HR and Administration) on contract basis in GSIDC for 1 year on monthly remuneration of Rs. 78,800.00 be and is hereby approved”.
Subsequently, though the appointment was for just one year, another year has extended it in an order issued in January this year.

As the government’s words on Bhumiputra, Mr Mohammad Ghouse Ummarsab Jamadar was granted an extension (contract basis) for six months with full financial powers.
Sources said Jamadar’s extension was not accepted by the Principal Chief Engineer, and hence he was appointed on a contract basis for six months from August 1. A backdate order was issued on 18/8.
Sources said that he cannot exercise any financial power according to the rule as his appointment is on a contract basis.
However, nothing is impossible in the Sawant government; he is now EE of WD 20.
Sources lamented that people are not getting one promotion after putting in 25 to 30 years of service, and these people, after getting three promotions, still don’t want to leave the department.