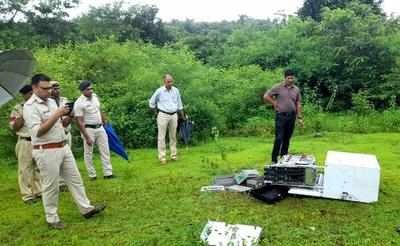 Goemkarponn desk:
PONDA: In the backdrop of rising theft cases, Ponda MLA and Minister Ravi Naik urged Police to be more vigilant in day and night patrolling.
He said if there is a shortage of Police staff, he will arrange for more police personnel by requesting CM.
Meanwhile, Ponda Police seized Omni Car used for ATM theft.at Usgao, which was found dumped at Margao.
Speaking to the media, Minister Ravi Naik expressed over four theft cases in a single day, which made locals panic.
Ravi Naik has said that Police should be alert and increase patrolling in the Taluka.
It maybe be recalled that on 18th August, in three different instances, thieves broke into a temple; in another instance, thieves stole two ATM machines and snatched a gold chain from a lady.
Police have also traced the van used to commit the crime. However, they are yet to trace the accused persons…