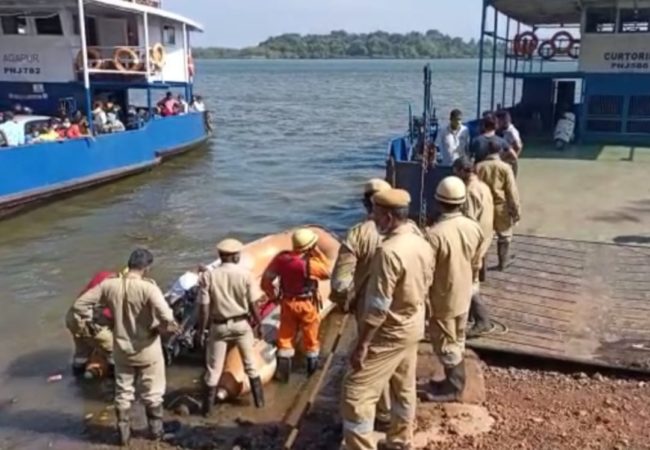 Goemkapronn desk
CORTALIM: Staff of river navigation Sitaram Maulvi (40) from Bandoda, Ponda was feared drowned after he went missing after falling from Ferry boat early morning today. Search operations by the fire brigade on
A staff of River Navigation Vasudev Naik informed that he had got in the water to remove a rope stuck in the fan of the “Curtorim ” ferry stationed at Cortalim jetty point but has gone missing since then.
Naik said that he later alerted the police and fire brigade, who have now begun search operations.
Speaking to the media Fire Officer Damodar Zambaulikar said that they had received a call at around 6.20 am about the incident of drowning.
“We immediately turned out here and also asked for Verna fire station support. However, the required equipment for carrying out the search was not available with us, and we then contacted the Curchorem fire station,” he said.
He added that teams of Curchorem and Verna fires station are carrying out a search operation to locate the body.
“We even tried to put a camera but we cannot detect anything as the water is not clear. We will continue our operations,” said Zambaulikar.

Goemkarponn Desk PANAJI: Governor of Goa P.S Sreedharan said that he would visit various social organizations working in Goa in the next two months to ... Read More

Goemkarponn Desk PANAJI: Minister for Art and Culture Govind Gaude has said that the 40th edition of the Surashree Kesarbai Kerkar Sangeet Samaroha will be ... Read More