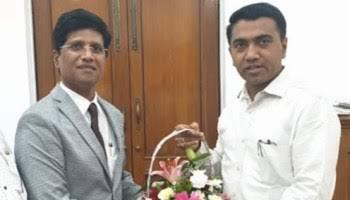 PANAJI: The Goa Government paid Advocate General Devidas Pangam a whopping Rs 2,41,13,732 (Two crores forty-one lakhs thirteen thousand seven hundred and thirty-two rupees) for the period from June 2019 to January this year. This has been revealed in the information obtained by Adv. Aires Rodrigues from the Law Department under the Right to Information Act.
The Pramod Sawant had appointed Devidas Pangam as Advocate General on 14th June 2019 with the rank and status of a Cabinet Minister.
Expressing concern over the continued huge expenditure being incurred on the Advocate General, Adv. Rodrigues has urged Devidas Pangam that as he is paid Rs 10,000 per appearance, it would be appropriate for him to desist from appearing in matters which are only being adjourned.
Adv. Rodrigues has expressed anguish that Goa, despite being the smallest state, is not only hosting India’s highest-paid Advocate General but also the country’s highest-paid public servant.
Stating that the Advocate General is being paid monthly an average of over eight lakhs, Adv. Rodrigues has pointed out that the President of India has paid Rs five lakhs a month while the Chief Justice of India gets Rs 2.80 lakhs and that a Supreme Court judge earns 2.50 lakhs while a High Court Judge takes home Rs 2.25 lakhs.
Adv. Rodrigues has further stated that in view of the very grim state of Goa’s exchequer, the government needs to examine whether the Advocate General really requires the rank and status of a Cabinet Minister, which would otherwise ease the financial burden on the State.
Further stating that the file notings reveal that Devidas Pangam did not follow the established convention of resigning on this March 12th along with Chief Minister Pramod Sawant, Adv. Rodrigues has stated that propriety required that the Advocate General should have put in his papers and waited to be re-appointed after Pramod Sawant was sworn in again as Chief Minister on March 28th.