Goemkarponn desk
PANAJI: On the backdrop of back-to-back prestigious events in the capital city of Panaji, the City seems like a “War Zone” with digging almost everywhere.
Prime Minister Narendra Modi will arrive in Goa to open three prestigious projects, Mopa International Airport, and Ayurveda Hospital and will also attend World Ayurveda Congress in Panaji on December 11.
So also, Panaji will host the feast of Immaculate Conception on December 8. Not to forget the IFFI and the St Francis Xavier Feast recently.
The situation in the City seems to have become chaotic, with dust and road closures everywhere.
The road from Caculo mall to the Tonca and Living Room to Haji Ali in St Inez has been closed for over a year to construct culverts. 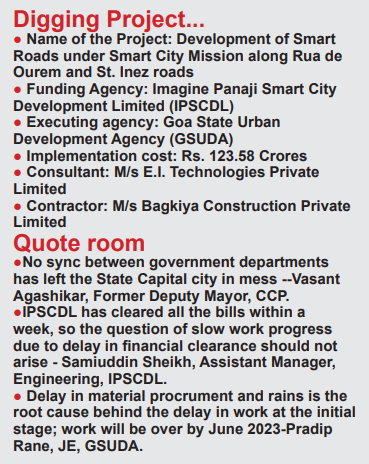 Most of the works are undertaken by Imagine Smart City Panaji Development Limited, which implements the Smart City Works. However, the IPSCDL officials claim they have no option left.
“In Panjim, no road works can be done between May 15 to October 15 due to monsoon and ban from the Collectors office. So, in a year, we only get 180 days to work on the ground. In addition, the International film festival and other festivals gulp almost a month due to the mass movement of people in the City during this period. IPSCDL can take up the road work project only during the aforementioned period of the year and hence shouldn’t be blamed for crowding up the projects”, the Assistant Manager, Engineering, IPSCDL, Samiuddin Sheikh, told Goemkarponn.
Sheikh further informed that the road work at Caculo mall is being executed by Goa State Urban Development Agency (GSUDA) under the Smart Cities Mission, which includes improvements of roads including up-gradation, augmentation, footpath, cycle track, dedicated utility corridor and laying of new electrical, water supply, sewage, optical fibre cable utilities for Smart Roads in Panaji-Goa under the Smart City Mission on Engineering Procurement and Construction (EPC) mode.
Answering one of the questions of Goemkarponn, Sheikh said, “the IPSCDL has cleared all the bills, and so the question of slow progress due to delay in payment should not arise”.

Yet another official, on the condition of anonymity, said that till now, only 10 per cent of the work has been completed, and the delay is due to the pace at which the Contractor is executing the work.
Former Deputy Mayor of the Corporation of the City of Panjim, Vasant Agshikar, alleged that the roads of Panjim city are in a mess due to a lack of coordination between the various government offices.
“It is impossible to complete the road work within a given span of time since the Contractor is working at the turtle’s pace. How is it even possible to finish off the projects within six months, which they couldn’t finish in the last two years?” questioned Agshikar.
Agshikar added that the hurry to complete the projects will affect the quality of work, leading to degradation in its quality. This will result in the construction of sub-standard roads.
“Development is smart when work carried out under the tag of smart development is quality work. Work carried out in the State capital is without proper planning and fears that the citizens will have to face the adverse effects soon”.
Substantiating his claim, Agshikar said the IPSCDL has taken up eight kilometres of the City’s road to developing a Universal walkway near Mahalaxmi temple.
To implement this, IPSCDL’s plan is to replace the drainage system on either side of the road with a central duct system. Have they ever thought that this will fear city flooding?, said Agshikar.
When speaking to Pradip Rane, JE, GSUDA said the road from Balbhavan to Ganapati temple is closed for 45 days for concretization. Regarding the slow progress in its implementation, Rane said, “Delay in the procurement of the material, rainy season the work is delayed. He further mentioned that around 25 per cent of the work is done, and it will be completed by June 2023.
IPSCDL, GSUDA, PWD sewerage and CCP are digging arterial routes such as the road at Mala, connecting road at Taleigao, near Central Library, Caculo mall, Balbhavan, Haji Ali and others.
Taking up work in an unphased manner by all the departments is leading to heavy traffic congestion in the City at peak hours. Mismanagement, lack of proper planning, and lack of coordination between the government offices is the main reason behind the mess in City, said Agshikar.
Adding, he said, “Current situation of the State Capital is such that Smart City is hurrying the execution of the projects in the haste of winding up the Smart City Mission; councillors of respective wards are unaware about the projects being executed in their wards. The Contractor is working at his own pace since no higher authority is taking many reviews. The general public is badly getting affected due to this is the sad reality”.
Centre, in October 2022, wrote to the government of Goa, directing it to speed up the work progress and finish up the Smart City Mission projects by June 2023. Centre has also asked the Smart City to increase the fund utilization and to take full Central share by mid-2023 and complete the maximum number of projects by June 2023.