So Near, Yet So Far: This is the Story of Goa’s two ambitious projects, the Zuari Bridge and the Mopa Airport, each costing over ₹ 3500 cr

Goemkarponn desk
PANAJI: As Goa completed its 60 years of freedom and India celebrated teh Azaadi Ka Amrit Mahotsav (75 years of Liberation), there has been a remarkable development in the State, notwithstanding the controversies.
As Goa embarks on the development journey, after Atal Sethu – which is marred by controversies, there are two more iconic projects which Goa will see thrown open to the public in 2022 (or at least promised to be opened) – the four lanes of Zuari Bridge and the first phase of the Mopa Airport.
While Zuari bridge, after missing several deadlines, is now scheduled to be inaugurated in November or December, the almost “complete” Mopa airport will be inaugurated in October as it awaits the dates of the Prime Minister Narendra Modi for the inauguration.

Zuari bridge missed deadlines
The Zuari bridge was initially to be inaugurated in April 2021, but due to the pandemic, the work was delayed and hence is now looking for the inauguration of one span by December.
While teh former PWD minister Deepak Pauskar just gave dates after dates for opening, the new PWD Minister seems to be a bit realistic and says the bridge cannot be opened in a hurry.
Nonetheless, whenever the bridge is opened, it will be a relief for people travelling from North to South Goa or vice-versa.

November could be the date… 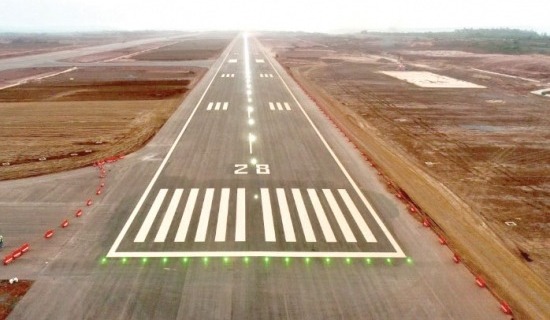 The entire span of the New Zuari bridge could be open for motorists between Verna and Bambolim by November, says Deogonda Patil, Dy Project Manager, DBL.
Patil says the last two segments of the main cable-stay bridge will be lifted by the end of this month, and the other aspects like the load testing and cable force monitoring will follow, signifying the near completion of the entire project.
Patil says teh last cable will be placed by the end of the month; it could take upto two more months to finish the other minor works.
He pointed out that the flyover at Siridona has already been opened to the public.
Explaining further, Patil said that the entire cable stay bridge has around 224 cables.
“The second last segment will be lifted tomorrow while the last will be at the end of this month.
However, Patil said, the weather would also play a crucial role in the completion of the project on time, as expected.
“We need to put the bituminous surface and take up the asphalting on the road for which we need weather gods to be kind to us as rains can further delay the works,” he said.
After that, he said the load testing would also be done with course correction.

Mopa gets the finishing touches
The Greenfield Airport at Mopa was scheduled to be inaugurated on the 75th year of Independence, i.e. August 15, but could not be completed on time.
The Chief Minister, Dr Pramod Sawant, had said that commercial flights would start from September 1, but that too has been delayed.
Sawant has now said that the project would be opened in October and is now awaiting the dates of Prime Minister Narendra Modi.
“Inauguration of Mopa International Airport may have been delayed. But we are completing the work by October 23 and will inaugurate it at the hands of Prime Minister Narendra Modi,” Goa Chief Minister Pramod Sawant said.
“International airlines want to sign an agreement with Goa. After Mopa is operational, 150 flights may land in Goa,” Sawant said.
Director Civil Aviation Suresh Shanbhogue told this paper earlier that the project is running on time.
“Almost all works are completed, and inauguration dates would be announced by the government soon,” he had said to this paper a few days ago.

Controversies galore…
Conceptualised and conceived way back in the 1990s, the facility has been in the making for almost as long as its bigger brother in Navi Mumbai. There have been many moments through its tumultuous history when it looked like the airport, being developed by GMR Goa International Airport Limited (GGIAL), would just be shelved. Opposed from the word go, locals and Goans every few years resigned themselves to their fate: the ill-equipped and rather crummy Dabolim airport, currently undergoing an expansion.
Yet close to two decades later, the privately managed and constructed, spanking new airport is all set to change the very axis of this tiny State when the first flight takes off in December 2022 (proposed launch as of now), although many detractors remain unconvinced that the State needs a second airport at all.
GMR Goa International Airport Limited (GGIAL), a subsidiary of GMR Airports Limited (GAL), is developing a Greenfield Airport at Mopa in North Goa. This project is being executed on a Public Private Partnership (PPP) model via a Design, Build, Finance, Operate and Transfer (DBFOT) basis. GGIAL will operate the airport by GMR for 40 years, extendable by 20 years, per broad lease agreements.
While the original estimate for constructing the airport was Rs 1,900 crore, it was later revised to Rs 2,615 crore due to the cost escalation and time overrun caused by environment-related litigations. The Covid-19 pandemic also disrupted the project completion schedule.
In its first phase, the airport is expected to cater to 4.5 million passengers; at the end of the fourth phase, its passenger handling capacity is expected to be 13 million.