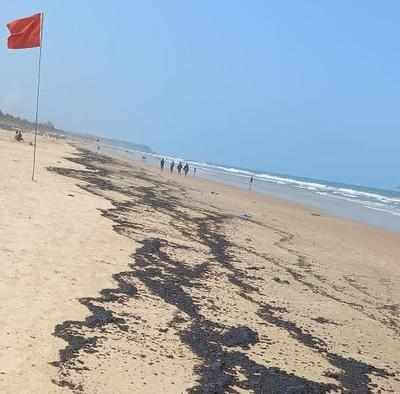 Tourism Minister Rohan Khaunte visited the Arossim-Cansaulim beach to get the first hand information and to see the tarballs spillage on the beach which the people are complaining annually.

“Goa State Pollution Control Board (GSPCB) and the beach cleaning staff has been given directions to collect the tarballs and the sea water samples from the beach to examine the contents from the sample. We will see the results of these sample,” said Khaunte

He further said that the tarballs spillage has been an annual issue which the people are complaining and as a tourism point of view the issue needs to resolved.

“Therefore we are also going to discuss this issue with the agencies or the people who are into the handling of hazardous waste,” he added

On a concluding note, Minister said that he will also going to discuss this matter with the Union Minister for Shipping and Ports and with the Chief Minister to get solution on this matter.