Tarballs are now an annual phenomenon on Canacona beaches 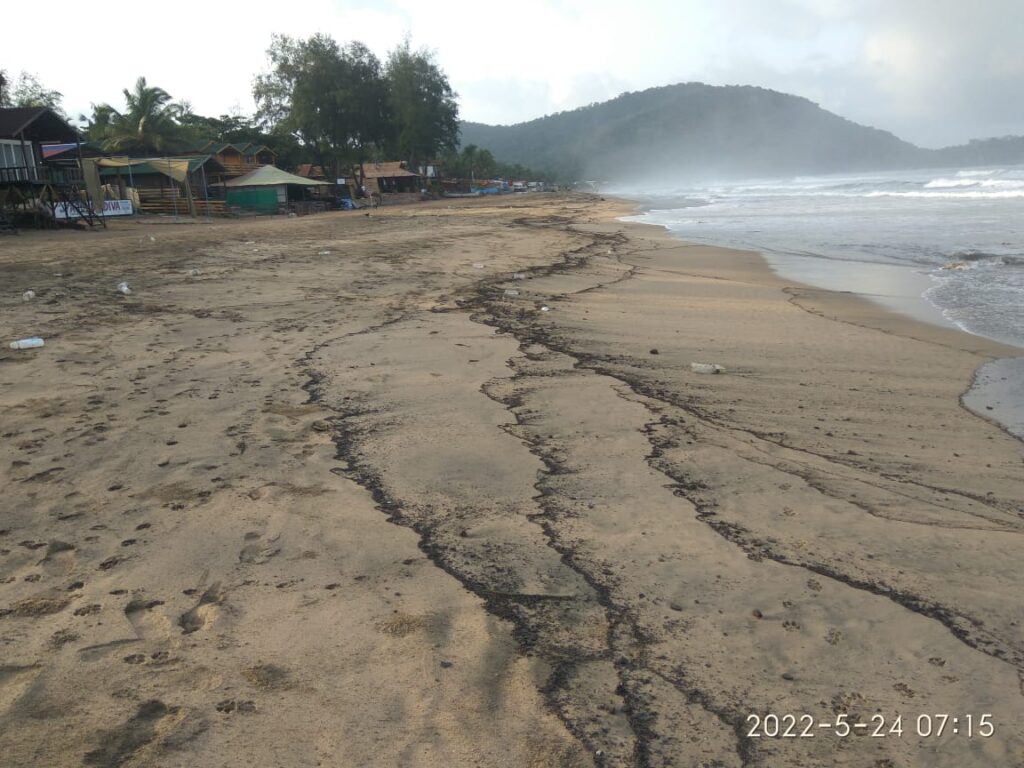 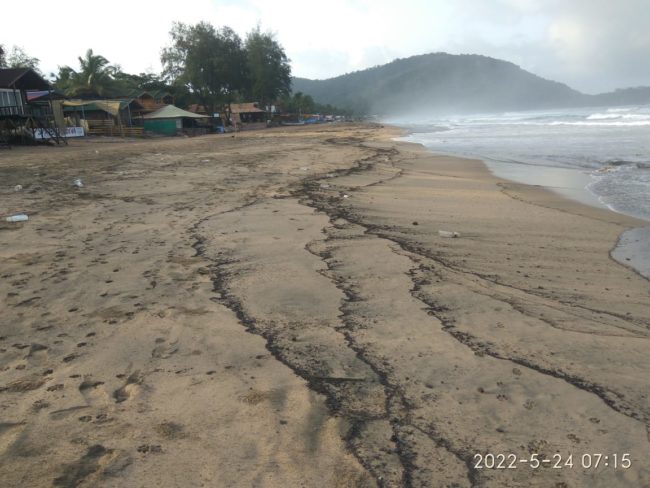 CANACONA – Beaches of Canacona, too, have been uncontrollable berserk with the Big, Tiny Tarballs and oil-spill invasions, and this feature has now almost become an annual phenomenon.
The past fortnight has been a witness to the invasion of Tarballs on various beaches of Canacona, be it the different Beach -coves of Khola, the often world tagged tourists’ favourite Agonda beach, Patnem and Colomb beaches in municipal areas, Talpona shore as well the turtle protected Galgibaga beach and the southernmost Beach of Polem bordering Karnataka State. These beaches saw more or less tar infestation, including the black, thicky oil spills. The situation has improved nowadays, but many expect that similar and even worst scenarios are still awaited in the ensuing monsoon season.
“Our beaches are subjected to different problems such as beach erosion, destruction of sand dunes, depletion of sand-dune vegetation, and invasion of tarballs. Tarballs have a devastating effect on the beach ecology and ecosystem because they pollute beaches, thereby affecting the birds and other aquatic life including the coastal vegetation”, informed an Environmentalist and Sealife enthusiast and an ex-professor with a reputed college.
According to him, the tarballs enter beaches mainly from two sources; Natural seepage from the ocean bottom, which mostly rocks oil and the release of oil by the trawlers, ships and fishermen in the open and
deep sea. Tarballs can be as small as grains and Sometimes as big as a football.
Another source reveals that many scientists think that the tarballs which result from the natural seepage cause positive benefits to the environment such tarballs are natural organic substances and act as food for many coastal organisms.
Subhash Mahale, an environmental expert/birds-lover and geography teacher, informed, “Tarballs on our beaches are common mostly during Monsoon seasons because of the winds and waves. Tarballs and floating oil spills from the big ships are carried to the shoreline. Many people in states like Goa depend on tourism for their livelihood.”
He said such actions bring a lot of miseries to people. The hard tarballs float and get deposited on the beaches since they are, and they can be removed with some effort. The floating sticky oils cause irreparable damage to the beach ecosystem because when birds land on such sticky substances, they get stuck.
“Similarly, they will have damaging effects on other aquatic organisms,” he said.
An expert in the field, however, believes that ‘”it is difficult to control the natural bottom sea seepage because it is a natural process, but we can control the oil spills of ships by keeping a strict vigil in the open seas by the Coast Guards of all countries and similarly, there is an immediate need to educate the fishing community using mechanical/Fuels and other stakeholders on the ill effects of tarballs.”