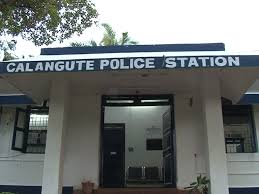 The news of arrest spread like wild fire amongst the taxi drivers, who gathered in large numbers at Calangute police station.

The taxi owners demanded immediate release of their colleague without any bond or bail.,

Finally, Yogesh was produced before SDM and released around 1.00 am. Police said Yogesh was earlier also involved in assault on Goa Miles drivers few days ago.

“There was another audio message from Yogesh asking taxi drivers to bash up one Paul Lobo, who has his taxi attached to Goa Miles,” he said.

Raposo said that Yogesh alias Mogembo personally came to Calangute and was found behind Calangute church trying to gather other taxi drivers at Calangute thereby creating law and order problem in Calangute area.

“It was very impottant for police to take action to prevent any law and order situation and I being police station incharge took him in custody and he was placed under arrest under 151 CrPC,” he said.

The PI said that that few days ago there was another incident wherein three Goa Miles taxi drivers were assaulted and taxis were damage.

“Such incidents cannot go on without taking action. They cannot take law in their hands and sort out their issues amicably with the government,” the PI said.

Speaking to reporters, Yogesh said he came to Calangute at 5.30 pm and was arrested by Calangute PI Nolasco Raposo without giving any reason.

“The PI said I was instigating taxi drivers for violence by sending messages on whatsapp. They said I was arrested under Section 151 and was produced before SDM and bailed out,” he said.

Yogesh said the Chief Minister Dr Pramod Sawant is using police machinaries to stiffle the voice of the taxi drivers.

“I am ready to sacrifice my life to save my business,” he said.