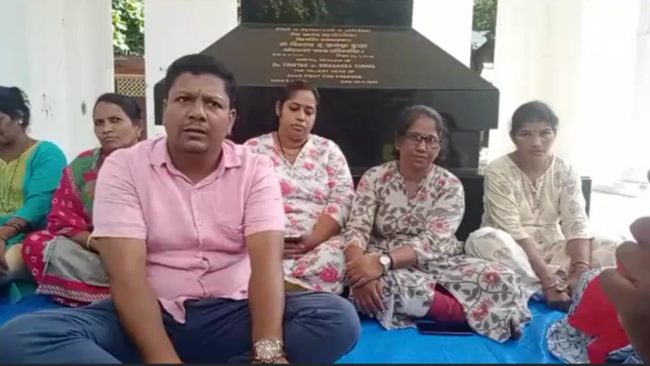 PANAJI: Terminated Anganwadi staff have now resorted to a chain hunger strike at Azad Maidan after their demands were not accepted.
The workers have been protesting at Azad Maidan for the last 5 days.
“It’s been more than 6 days that the Anganwadi workers are on #strike, demanding to get back to work. They call for justice and state that their chain hunger strike will continue until their demands are not met,” said Trade Union leader Hrudaynath Shirodkar
Shirodkar said that out of 11 demands, only three have been settled by the government. The pending demands are treating Anganwadi helpers and workers at par with government employees, enhancement in the remuneration, yearly increment, seniority increment, continuity in service, equal pay for equal work, sick leave and absorption in government service yet to be fulfilled.
Hrudaynath Shirodkar pointed out that this has been a long-pending demand and much deserved.
While the Anganwadi workers also touched upon the increased cost of living and inflated prices of essential commodities.
They also described their years of service and the type of work they had been doing without any raise. Past promises to increase their payment have also not been delivered.

Usgalimol petroglyphs in South Goa get shortlisted as a UNESCO World Heritage site!

Goemkarponn desk SANGUEM: Bringing cheer to the state and the country, the Usgalimol petroglyphs in South Goa have now been included in the provisional list ... Read More

Panaji: BJP Panaji MLA Babush Monserratte is facing hit within the party for the CCP elections. Divide within BJP was quite evident today during the ... Read More