The victory is never your or mine! It’s always OURS: Amit Palekar(after breaking his Hunger Strike) 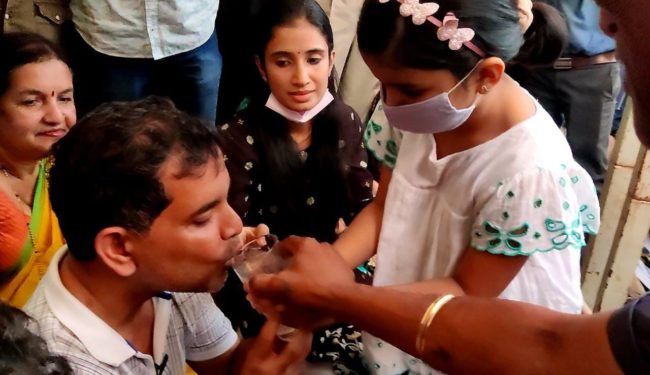 Advocate Amit Palekar broke his fast after the BJP government ordered the demolition of the illegal structure built at the Old Goa heritage site. Although, he broke his fast, he is going to persue the matter legally. 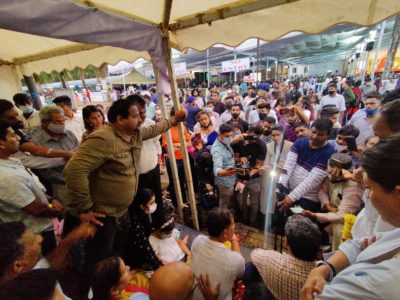 Palekar was on fast unto death against an illegal structure erected at Old Goa since Monday. On his fifth day of the strike, the government issued demolition order and Palekar broke his fast at the hands of his little daughter in the presence of his family, AAP leaders, social activist and many people who were there to extend their support.

On the day of ‘Goencho Saibache Feast’, the TCP wrote to Old Goa Panchayat, to revoke technical clearance and demolish the illegal structure. Reacting to this Palekar said, “This is just the beginning of a new revolution in Goa. This victory belongs to Goenkars. No one can destroy our Goa. I have heard 30 odd masses for the last five days. It was an amazing time and memorable one”.

He further said, “I have received immense support and love from the Goans for the last five days and with ‘Saibache’ blessings I could garner the strength to continue the fast. I will fight till the last breath for the glory of Goa”.

AAP Goa Convenor Rahul Mhambre said, “We are committed to preserve our Goa and it’s heritage for posterity. Our fight will continue to protect Goa from landsharks.

This is just a beginning and it shall continue”.

On Friday, a lot of Goans gathered to support Palekar who is on indefinite strike to save Old Goa, since the last five days.

The concerned citizens who are on hunger strike, congratuled Palekar. Palekar was an integral part of the fight against the illegal structure and because of him all were able to push the government to issue the demolition order, they opined.

Advocate Amit Palekar underwent a medical check up on the fifth day of his indefinite hunger strike. The doctor advised him to end the hunger strike as his oxygen level was dropping and he was suffering from severe headache and dizziness. After breaking the fast, Palekar is being taken to the hospital for a regular check up and after treatment doctor will allow him to go home.

Earlier Palekar has stated that the documents presented before the CM and deputy CM by some of the concerned citizens of Goa, clearly indicates the current structure is illegal. Old Goa is known as world heritage site and many pilgrims visits Old Goa. Therefore, it is very important to protect the Old Goa from any further development projects that will affect the heritage site.

After the intervention of AAP, ESG takes action against IFFI’s fixed tenders

Calangute Congress Committee says not taken into confidence on Lobo