Tourism has under-performed due to Goa’s limited Int network 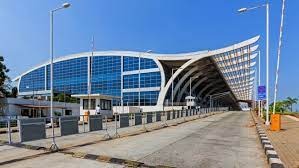 Goemkarponn desk
DABOLIM: CAPA – Centre for Aviation says Dabolim airport is operated by the state-owned Airports Authority of India (AAI) as a civil enclave within an airfield that is managed by the Indian Navy.
Sharing infrastructure with a defence force imposes certain operating restrictions on commercial airline services. Due to military training exercises, commercial operations are prohibited between 8.30am and 1pm on week days. There are also occasional restrictions in the evening.
This limits the availability of preferred slots for airlines and also results in heightened peaks in arcraft movements just after the curfew ends at 1pm for which capacity has to be provisioned and which then lies under-utilised for much of the rest of the day.
The airport has limited apron space and the absence of high speed exits for arriving aircraft results in high runway occupancy time, creating significant congestion during the peak period between November and January each year.
International traffic flows at the airport are highly seasonal, with 48.0% of passengers handled in the three months between January and March and 77.2% in the five months between November and March.
Goa’s challenges are exacerbated by the fact that almost 50% of its domestic capacity is to Mumbai, the closest major gateway, which is itself a slot-constrained airport. 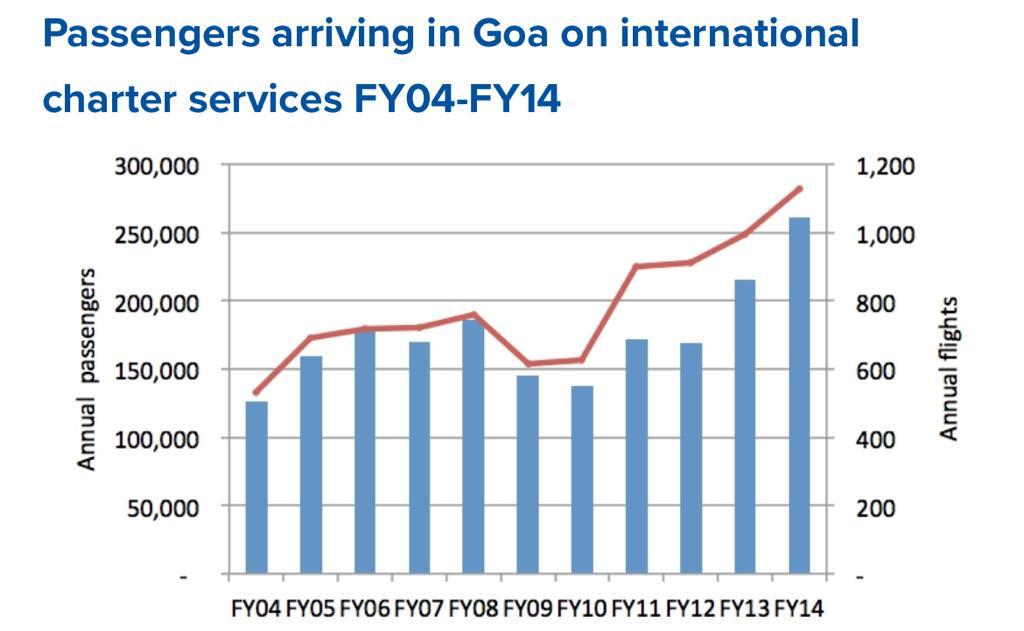 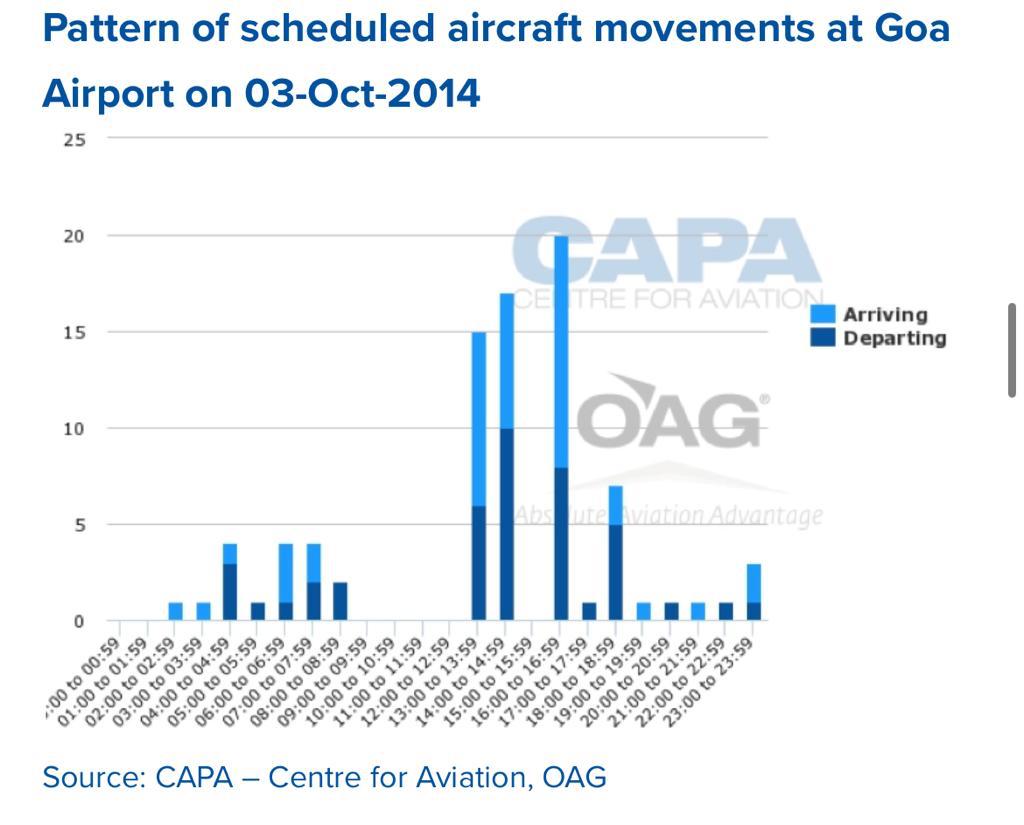 However, given that Goa has a very limited network, many passengers have no option but to connect via Mumbai. This presents particular challenges for international travellers.
The majority of international arrivals in Mumbai from the key Asian, European and Gulf hubs occur between 9pm and 5am. Passengers arriving between 9pm and 1am face a lengthy transit until the first and only morning bank of domestic services depart for Goa between 5am and 5.30am. Passengers arriving after 3am have insufficient time to connect and have to wait until the next bank of departures starting from 12 noon. On the return there are only limited evening services from Goa to Mumbai to connect with the main international departures.
As a result, our research indicates that many foreign tour operators and conferences/incentives organisers have concluded that despite its many attractions, Goa is a difficult destination to sell on scheduled services because of the connectivity challenges.
A 24 hour airport at Mopa will have the ability to attract a wider range of international services that may simply not be able to operate within the restrictions in place at Dabolim.

Inbound tourism has under-performed due to Goa’s limited international network; charter services dominate the market
According to the Goa Department of Tourism statistics, foreign visitor arrivals to Goa have increased by just 4.6% per annum over the last ten years, compared with 9.6% at the all-India level.
The modest growth rate is partly due to the airport’s limited international connectivity. The only year-round scheduled operations are to the Middle East, and a large proportion of traffic on these services consists of expatriate labour rather than tourists.
Air India has no feed beyond the Middle East, while Air Arabia operates a point-to-point model. Although a substantial proportion of its passengers self-connect, Air Arabia does not operate to any of the leading souce markets for Goa apart from Russia.
Qatar Airways is the only carrier that currently connects Goa with a global network, however capacity is limited with just a daily narrow body service. In Nov-2014 Jet Airways will launch daily Goa-Abu Dhabi service with 737 equipment, feeding into its partner Etihad’s hub.
One of the reasons for the limited year-round scheduled network is that tourist arrivals are highly concentrated from November to March due to the destination’s attraction as a winter sun destination for European tourists.
During these months the international network is boosted by a number of seasonal charter and scheduled operations by European carriers, primarily from the UK, Germany, Russia and the Ukraine. Airlines that have operated seasonally to Goa include Aeroflot, Condor, Transaero, Thomson, Thomas Cook, Ukraine International Airlines and VIM.
A more diverse network will not only support tourism growth but will also reduce the risk of dependency on European markets. Russia is currently the largest source market and accounts for a third of total arrivals, followed by the UK.
These two markets alone accounted for 63% of foreign visitors in 2013, while Europe as a whole represented more than 90% of total international arrivals. The eight largest source markets were all European, followed by the US and Australia.
Asia is the fastest-growing source region for tourism to India overall, as is the case for many destinations around the world. However, there is no international connectivity between Asia and Goa, and Asian tourists accounted for less than 2% of visitors to Goa in 2013.
Unlike competing beach destinations such as Bali, the Maldives and Mauritius, Goa has failed to tap into China’s inexorable growth of outbound tourism. This represents massive upside potential if the airport and tourism operators are able to develop this opportunity.
India is expected to liberalise its immigration requirements within the next six months by extending visa-on-arrival facilities to the citizens of most of its largest source markets (although Chinese nationals are not expected to be eligible for the visa-on-arrival programme). This has the potential to stimulate more spontaneous, short break holidays but such travel requires that visitors are able to fly directly to their destination.
If Goa wishes to leverage this opportunity it must have a far more diverse network and attract a broader range of airlines.
Hotel operators and developers appear to be optimistic about the tourism potential in Goa, despite the challenges. HVS research indicates that the supply of branded hotel rooms in the state is expected to increase by 50% over the next five years, the majority of which is already under active development. More than 70% of this capacity will be in the mid-market and budget categories which has implications for the category of airlines that should be targeted.

Passenger traffic at Goa has grown at strong double-digit rates over the last decade
In FY2014 Goa Dabolim handled 4.0 million passengers, making it the ninth largest airport in India. Domestic passenger movements accounted for 82% of total traffic.
Over the last decade Goa’s domestic traffic grew at a compound annual growth rate (CAGR) of 16.5%, while international passenger movements increased at 10.2%. In the first five months of FY2015 total traffic is up a further 18.0% year-on-year, the highest growth rate amongst the ten largest airports in India.
The strength of the market is also visible in the fact that between FY2009 and FY2014, when traffic growth across India was more subdued than during the previous five years, Goa outpaced the national average and maintained double-digit annual growth.
This strong growth has been achieved despite various operational constraints at the airport and without any concerted effort at airline marketing and route development.
According to the Goa Directorate of Tourism, inbound domestic and international tourist arrivals have grown at just 4.4% per annum over the last ten years.
This suggests that much of the growth in airport traffic is due to a combination of travel by residents of Goa, as well as modal substitution with a greater proportion of tourists that used to travel by road and rail now arriving by air as a result of the availability of lower fares.