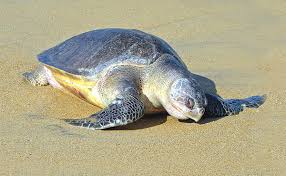 Panaji:  The National Green Tribunal(NGT) has upheld the Goa Coastal Managements (GCZMA) order of removal of unauthorized structures around the Olive Ridley turtle nesting sites on the designated beaches of Mandrem, Morjim, Agonda and Galjibag.

The NGT order passed by Sheo Kumar Singh, JM Dr. Satyawan Singh Garbyal, EM has directed GCZMA to remove all structures before the commencement of the nesting season next month.

The NGT said that Goa is fortunate to have some of the beaches which are preferred by the sea turtles particularly Olive Ridley turtles for laying their eggs, therefore, every effort is required to be made by the concerned authorities to keep such beaches undisturbed and in pristine condition.

“There should not be any structures, whether temporary or permanent, to be erected in such beaches and no artificial lighting or the food articles or litters to be allowed to be thrown in these beaches. Artificial lights disturb turtles since they are extremely sensitive as they are guided by natural light and moon lights. And there should not be any litter on the beaches which would attract unwanted predators,” the NGT order said.

It said there should not be any interference during hatching process and a distance should be maintained, and if disturbed the turtles withdraw from nesting.

“We, therefore, direct that the sheds, sunbeds etc., which are there in these beaches are removed before the turtle nesting season begins. The authorities may also keep these areas fenced to keep the beaches pristine and undisturbed during turtle nesting season which starts in November – December and continuous upto March-April,” it stated.

It further said that according to the discussion made as above, NGT does not find any substance and merit in the present appeal.

“Accordingly, appeal deserves to be dismissed and accordingly dismissed with costs of Rs. 50,000/- which would be paid to CPCB within 15 days. The GCZMA is directed to proceed and ensure the compliance to the order and guidelines mentioned above withregard to the turtle feeding,”  the order said.

100 activists in Goa resolve to fight against Mhadei water diversion