13 incidents report over the weekend at Goa's busy coastline 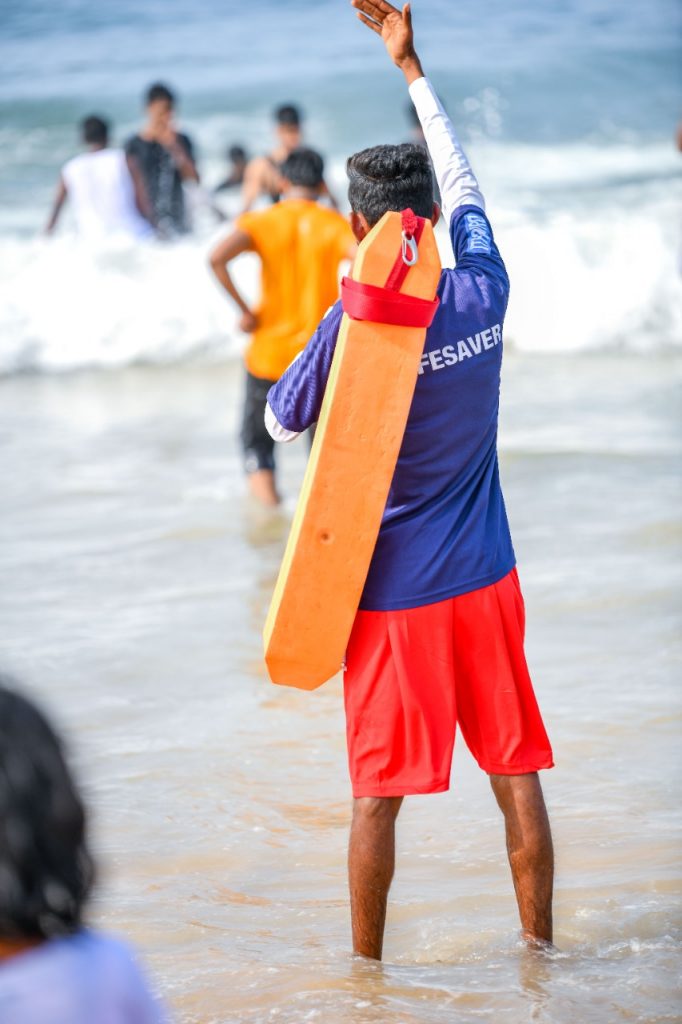 Goemkarponn desk
PANAJI: The weekend in Goa witnessed a rise in the number of beach-related incidents across the state, as reported by Drishti Marine.
Drishti Lifesavers are trained to handle emergency situations, and this weekend the lifesavers had to put in an extra shift.
There were 13 rescues reported across Goa’s coastal belt. In a busy weekend, Calangute witnessed two double rescues, one multiple rescues and a single rescue, while Baga reported one rescue. Arambol, Agonda and Vagator each reported one water-based rescue on the individual beaches.
The beaches remain restricted to public for swimming due to the harsh and unpredictable currents.
Four individuals from Karnataka, aged 20 to 25, were caught in a strong current and thrown into the deep by the force of the waves at Calangute beach.
When they heard a commotion on the shore, the lifesavers Sajan, Leslie, Sandeep, Rohit, and Shubam were quick on their feet to attend to the individuals in danger. The four people were secured using a combination of rescue tubes and surfboards. On two separate occasions, two double rescues were performed on the beaches.
On one occasion, two individuals from Rajasthan, ages 32 and 34, were caught in a strong wave, which threw them off balance and swept them into the harsh currents. Drishti lifesavers Divakar and Pandurang used a rescue tube and a jetski to secure them. A similar series of events occurred in another area of the beach with two young males from Bangalore, ages 18 and 20.
The same five lifesavers again were called into action when beachgoers reported two individuals struggling to swim and screaming for help in the water.
They were brought back to shore with the help of a rescue tube and jetskis, where they were given medical attention.
Lifesavers Shivraj and Rohit performed a single rescue with a rescue tube at a different location. Amongst the multiple rescues performed on the beaches, A two-year-old girl was reported missing by her mother, who desperately searched for her in a crowded beach.
After the frantic mother brought it to the attention of the lifesavers, an announcement was made immediately.
With the help of the jeep, the lifesavers helped track the girl down and return the child to her mother. The woman profusely thanked the lifesavers for their efforts in returning her child to her.
The shores of Baga also witnessed a search for two missing children on two separate occasions. When a concerned father hailing from Rajasthan was desperately trying to look for his 6-year-old child who left his sights for a brief moment in a large crowd of beachgoers. With the lifesavers’ assistance, an announcement was made from the jeep. The search concluded 10 minutes later after the lifesavers found the boy with the father’s description at different locations all by himself. Under similar circumstances, a man from Uttarakhand was left distraught when he couldn’t locate his 10-year-old.
The lifesavers helped find and return the child back to the father. On a separate occasion at Baga beach, a 35year-old from Karnataka was rescued by the safe hands of the lifesavers after he found himself struggling to swim while being pulled into the deep further by the immense tides.
The man was seen thrashing his hands to signal for help. The lifesavers Sanjay, Naik, Vishal, Manthan and Narayan were involved in safely bringing the individual back to shore.
Agonda, Arambol and Vagator had witnessed single rescues at each beach. At Agonda, a Russian national was rescued with the help of Ashok and Kashinath. While a 36year old male from Shimla was securely returned back to shore after a brief struggle in the harsh currents that left him a troubled situation.
At Vagator, a defiant individual proceeded to swim in the waters after numerous instructions from the lifesavers to avoid swimming due to the unpredictable currents and harsh waves. The individual was rescued by the lifesaver Rajesh who rushed to the aid of the individual who was left in a dangerous situation after a strong wave knocked the individual and left him wrestling for survival in the deep waters.
The individual was grateful and apologised to the lifesaver.