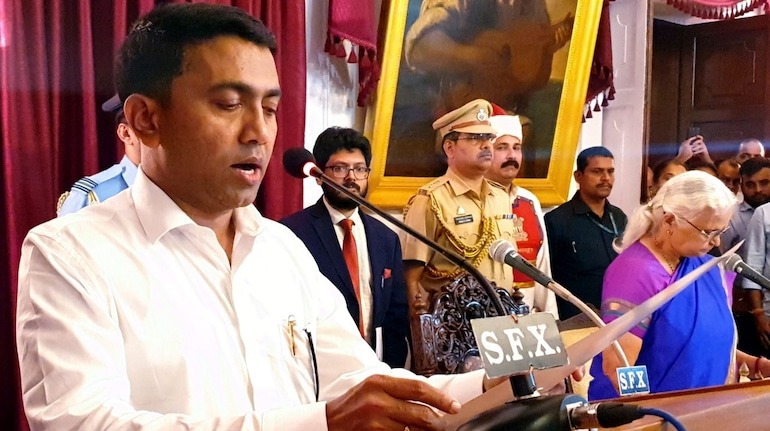 Goemkarponn desk
PANAJI: The Directorate of Vigilance has submitted its report to the State government after examining the complaint over the exorbitant expenditure incurred and serious procedural lapses in holding that gala Swearing-in-ceremony of Goa Chief Minister and his eight Ministers, which was held on March 28th at the Dr Shyama Prasad Mukherjee Stadium in Bambolim.
In his complaint to the Director of Vigilance on June 6th, Adv. Rodrigues had submitted a copy of the documents obtained by him under the RTI Act from the General Administration Department at the Secretariat to the effect that the 18-minute swearing-in ceremony cost the taxpayers a whopping Rs 5, 59, 25, 805 (Rupees five crore fifty-nine lakhs twenty-five thousand eight hundred five).
Adv. Rodrigues also gave the Vigilance department a copy of documents obtained by him from the Goa Tourism Development Corporation (GTDC) to the effect that a further whopping amount of Rs 72, 21.972 (rupees seventy-two lakhs twenty one thousand nine hundred and seventy-two) was spent on the 134 vehicles hired for VIPs and their security attending that swearing-in ceremony.
Pointing out that the documents revealed that there was no transparency and accountability in holding that event, Adv. Rodrigues, in his complaint, had stated that the entire process of appointing the event management company M/S Vinsan Graphics was apparently stage-managed and a mere eye-wash.
Adv. Rodrigues, in his complaint, also stated that an investigation by the Vigilance department needs to fix responsibility on those responsible for this colossal waste of public funds and loss to the exchequer on account of the inflated bills.
Seeking a thorough inquiry in accordance with the law, Adv. Rodrigues, in his complaint, had further sought that those guilty be brought to book.