Vishwa(S)-GHAT again? SETBACK for BJP ahead of D-DAY… 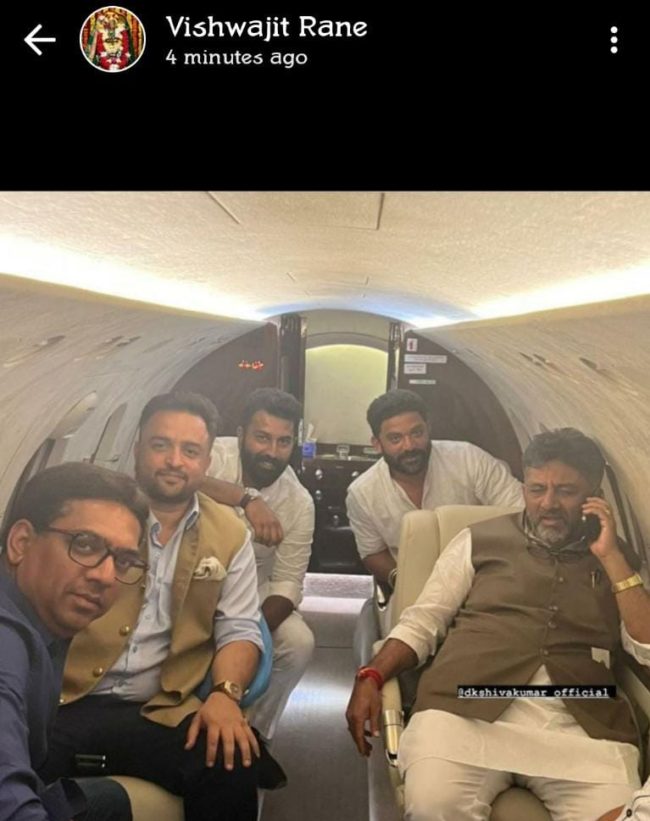 · Vishwajit puts BJP in a quandary, posts photo of Congress leader DK Shivkumar arrival in Goa on WhatsApp status, deletes after uproar
· Political BIGWIGS arrive in State ahead of D-Day

PANAJI: It seems like the Valpoi and Poriem constituencies seemed to be set for by-poll even before the counting of the 2022 assembly elections are yet to be concluded.
Vishwajit Rane, the Health Minister in Dr Pramod Sawant’s government, has kicked off a controversy ahead of Counting day, posting the photograph of Congress’ Karnataka leader DK Shivkumar in a chartered flight arriving in Goa as his WhatsApp status.
Rane’s post indicated that he might repeat what he did in 2017 in case BJP fails to retain power.
Rane had resigned as MLA a few hours after taking an oath on the very first day of the Assembly. He was immediately appointed Health Minister in the Manohar Parrikar government.
Interestingly, Rane is eyeing the CMs chair and has been at loggerheads with CM Dr Pramod Sawant on several occasions.

All eyes on Goa…
With Exit polls showing Punjab clearly going to AAP and UP to BJP, the Congress has put all its might in Goa.
A day ahead of counting day in Goa on March 10, the political bigwigs of Congress, TMC and BJP have landed in Goa to protect their flock from defection and hold negotiations with regional parties and independents for government formation.
The Exit polls predicting a hung assembly would be the battle of nerves after counting culminates in Goa.
It is clear that both Congress and BJP would require the support of regional parties like MGP and independents to form the next government.
The Congress, which could form government in 2017 despite being the single largest party, leaves no stone unturned to form the next government.
Former Union Finance Minister P.Chidambaram, Dinesh Gundu Rao, and DK Shivkumar have all landed up in Goa to see that Congress does not repeat the mistake.
“We will not repeat the same mistakes done in 2017. You will see by 5 pm we will stake claim to form the next government,” AICC Goa desk in-charge Dinesh Gundu Rao told Goemkarponn in an exclusive chat.
He said that Congress lost five years of power due to error of judgement.
On resort politics, he said, there is nothing like that, and things are being blown out of proportion.
“There is no waste of money as being said. It was the wish of all the candidates that all of them should stay together to avoid controversies. The BJP dirty-tricking department is spreading the fake news about resort politics,” he said.

TMC leaders too in Goa…
Not just Congress, TMC MP Abhishek Banerjee has also landed in Goa to protect his party’s would-be MLAs by the BJP.
Sources said the I-PAC chief Prashant Kishor is also expected to land in Goa soon.