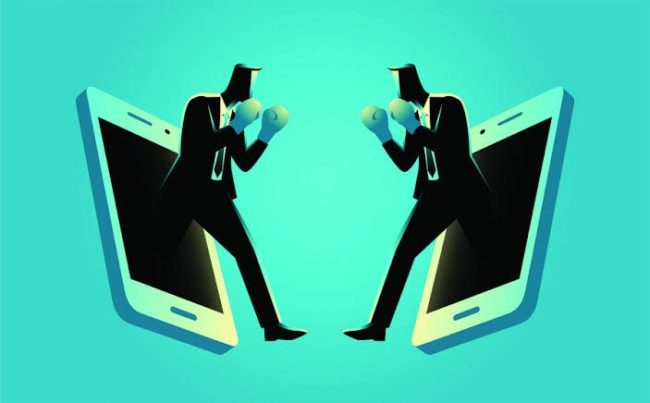 VASCO: Fr. Bolmax Pereira, parish priest of Chicalim and Viresh Borkar of Revolutionary Goans both, feel that their counterparts are making baseless allegations against each other. The social media war between the Revolutionary Goans and the Fr. Bolmax Pereira day after day turned bitter.
For many days, posts against Fr. Bolmax Pereira and Revolutionary Goans are taking rounds on social media platforms. Arguments and comments are being made from both sides of the people, some supporting Fr. Pereira, whereas some defending Revolutionary Goans. Goemkarponn made an effort to talk to both sides to know what went wrong and why such bitterness had spread among Goans on the Social media platforms.
When contacted Dr Fr. Bolmax Pereira, Chicalim parish priest and asked about the series of indirect and direct posts mocking him on Social media, he said that some Revolutionary Goans members and their supporters are posting some derogatory posts against me.
There are accusations made against me by RG members that I am doing politics in the name of religion etc., and supporting some political party; if RG members feel so, then they could complain to my religious higher-ups.
“I have decided not to reply to their rants on social media. Revolutionary Goans are just “social media Cowboys”. I had also offered them to come face to face and debate and discuss if they have any issues to be sorted out, but no one from RG has come to me to date. I have a lot more important things to do rather than waste my time on such things,” Fr. Bolmax added.
On the other hand, Viresh Borkar, MLA of St. Andre and the Revolutionary Goans chief, said that they do not have any issue with Fr. Bolmax. “But for many days, some people from Fr. Bolmax Pereira’s camp, like Capt. Viriato is making baseless allegations against Revolutionary Goans that our party was the reason to split the votes in the 2022 assembly election and that we are the ‘B’ team of BJP, and we are associated with the RSS, which is not true,” he said.
“I want to tell these critics that there is no evidence that we are RSS members, nor are we funded by the RSS. This is being done to corner us. We have established ourselves through our own hard work and efforts. I don’t feel that we should respond to those who are making baseless allegations. But I can’t dictate terms to our supporters who feel offended and put some posts against our critics. Each one has their own way of thinking and sentiments,” Borkar said.