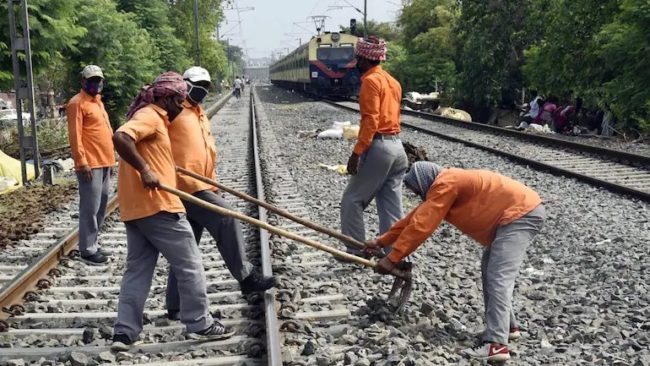 MUMBAI: The Supreme Court on May 9 cancelled the clearance given by the National Board for Wildlife (NBWL) to doubling of the railway track between Tinaighat-Castle Rock in Karnataka and Kulem in Goa. The railway line is proposed to pass through 120.8 hectares of protected area in the Bhagwan Mahavir Wildlife Sanctuary in Goa and 10.4 hectares in Karnataka’s Dandeli Wildlife Sanctuary. The ruling is based on the recommendations of a Central Empowered Committee (CEC) that the SC had appointed in September 2020 on this contentious matter after NGO Goa Foundation filed a petition seeking scrapping of the project. The court, however, has allowed the South Western Railway to reapply for clearance.
In its report submitted on April 23, 2021, the CEC, headed by member secretary Amarnath Shetty, had reportedly pointed out that doubling of the railway line will only marginally enhance the capacity of this railway stretch passing through a tiger reserve, two wildlife sanctuaries and a national park. The CEC had recommended revoking of the clearance granted by NBWL.
The railways undertook the project in 2019 through the Rail Vikas Nigam Limited (RVNL). The NBWL clearance came in June 2020. Of the 342 km of proposed track-doubling, 90 km are in Goa. Of these 90 km, 29 km pass through a protected wildlife area. While 120 hectares of land required for the track-doubling fall under protected areas in Goa, 10.4 hectares are in the Dandeli Wildlife Sanctuary and Haliyal forest division of Karnataka. The SC has made it clear that the project has not been scrapped. It has allowed the railways to carry out a detailed analysis of the impact on the biodiversity and ecology of the protected areas so that it can reapply to the NBWL for a green clearance.
The CEC has observed that the existing Konkan Railway line gives excellent connectivity between the northern and southern parts of India. The proposed doubling of railway line between Karnataka and Goa will not have any positive impact on the gradient and it will continue to operate at the same ‘inefficient level’. The new railway line will seriously impede movement of animals like tigers and elephants. The NBWL granted clearance without obtaining mandatory advice from the National Tiger Conservation Authority, the CEC said.
The CEC also upheld the argument made by environmental activists to it that the track-doubling was unnecessary since both Goa and Karnataka have a good road network. “The connectivity between Goa and Karnataka is being improved by four-laning of the national highway,” the CEC noted. It also dismissed the theory that a widened rail tract would improve freight movement. “The current movement of goods to MPT (Mormugao Port Trust) constitutes only about 20 per cent of rakes going out of the state (Goa),” the CEC said.
Claude Alvares, director of Goa Foundation, claims the track-doubling was intended to increase coal freight capacity of the railway line. He warns that turning Goa into a coal hub will prove to be disastrous for the state’s ecology. “The SC order is the biggest defeat for the railways in a long time,” he said. Abhijit Prabhudesai, a Goa-based environmentalist, says opposition to the project would continue till the time it is scrapped.
The railways, however, appear firm on carrying out the track widening outside the disputed area. The SC order relates to the 25 km Ghat section near the popular Dudhsagar waterfall in Goa. The railways will stop work in this section for the time being but have decided to go ahead with the project in other areas. This is one development vs. environment battle that looks set to fester.