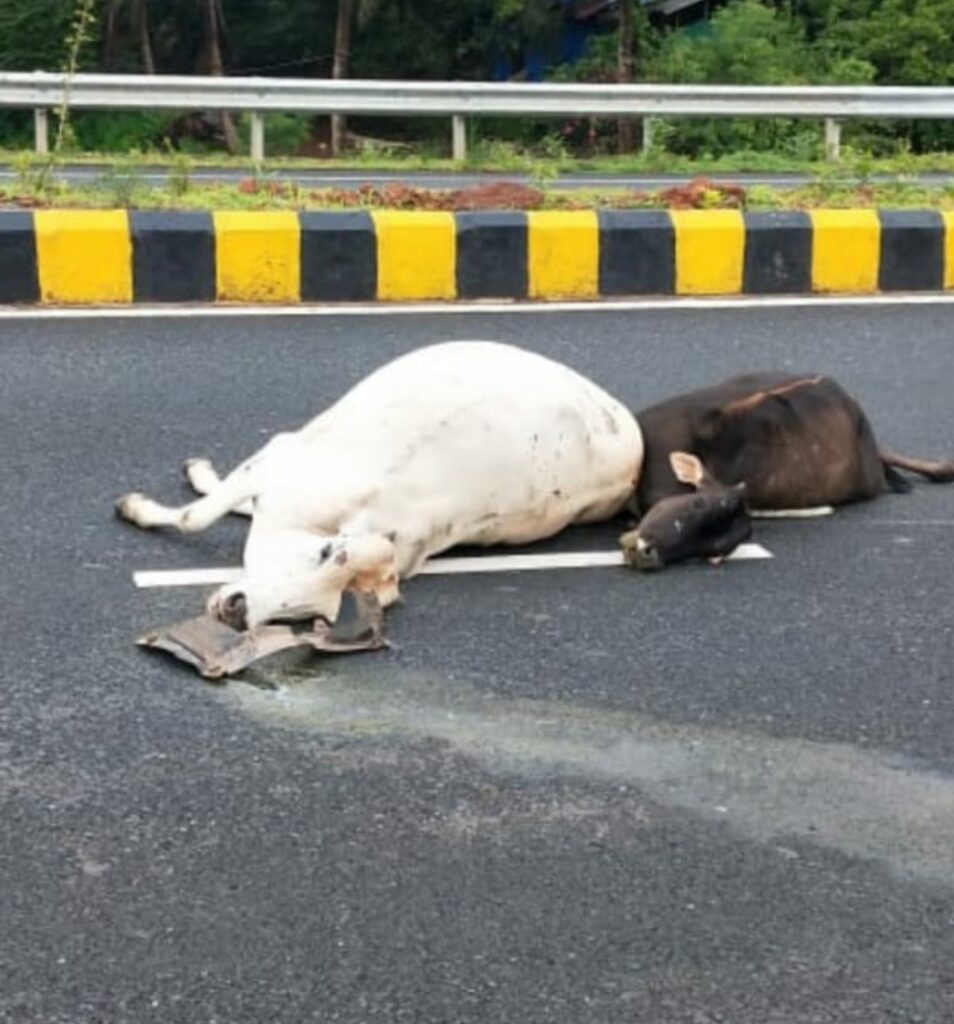 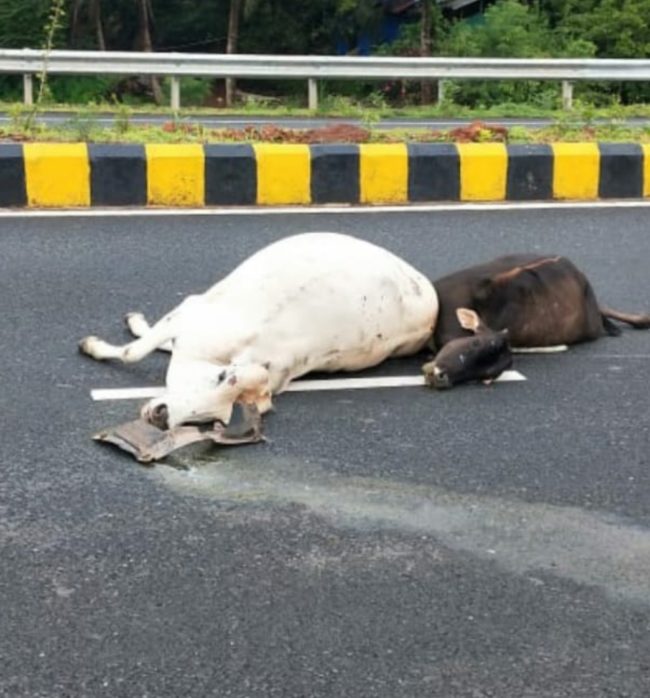 Goemkarponn desk
CANACONA: The NH66 road crisscrossing through Karmalghat and nearby areas is seeing scores of animals, mostly stray cattle, as well as wild, ran over by speeding vehicles, to draw the attention of everyone around including the authorities the animal lovers for a start have decided to name this 20km stretch as ‘Slaughter Road’.
If one considers the death of six cattle during the last seven days itself, one can understand the magnitude of this issue, many locals say.
NH66 road after Balli in Quepem taluka mostly passes through the dense forest till it reaches Gulem. In contrast, from Gulem to Polem in Canacona, the road winds its way through agricultural land on the fringes of which human beings reside.
It’s a perfect setup for many wild animals, and they have made the Karmalghat and the nearby forest their abode; as the NH66 road divides the forest, it necessitates the wild animals to cross this road ultimately to be run over by the hard-hearted human beings, wildlife lovers say. 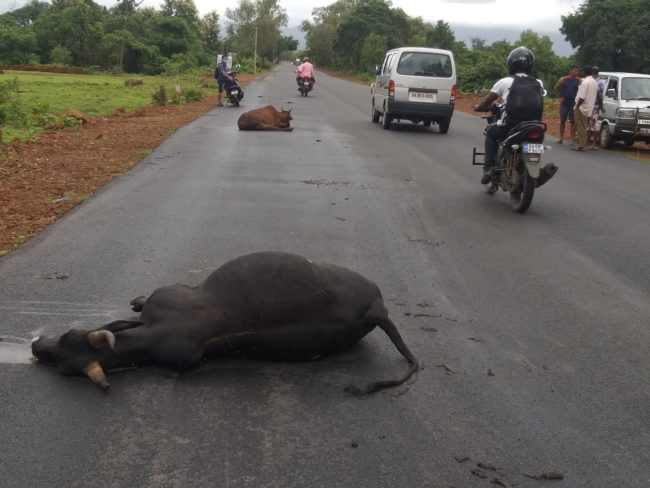 It is not uncommon or unusual to see wild animals run over by vehicles on this road but more.
Since the last few months, frequent deaths of stray cattle have drawn the public’s attention in recent times.
Last week, a particular incident in which a cow struck by a moving vehicle with both her hind legs broken struggling on the NH66 road at Loliem for a day drew many eyeballs and exposed the entire episode’s cruel part made viral on social media platforms.
“The bovine was struck by a moving vehicle in the night and lay on the road, she was alive but was not able to move as all of her legs had injuries, its high time the authorities realize that these animals have also
a dignity and right to medical attention and should not be allowed to die such a cruel death,” a resident said.
This stretch of road is one of the deadliest roads for animals in the state.
The worst area nicknamed ‘Slaughter Road’ spanned over 20km of the highway has claimed the lives of wild animals, stray dogs and cattle over just two years.
Unluckily there is neither an under or an overpass for the animals to pass from one side of the road to another; unfortunately, there are even no signboards to warn drivers to drive slowly in this stretch, informed Manoj Prabhugaonkar, an animal life enthusiast from Canacona.
The animals have to cross the roads for feeding or to mate, the chances of them getting killed on the street is more in the night as they get blinded with the glare of the lights of the vehicles, wildlife department has to build corridors for the wild animals to cross the road otherwise more and more wild animals will get killed” Prabhugaonkar emphasized.
Vishant Prabugaonkar, another resident of the taluka, informed that the death of bovines on the NH66 in Canacona is now a standard feature as more and more are run over by heavy vehicles in the night.
“These animals squat on the road, and during night time the drivers can’t see them and are run over killing them or seriously injuring them”.
“The seriously injured bovines are seen for days on the road or the roadside suffering with no water and food. It’s time someone takes responsibility for these innocent animals and takes care of them”, informed Prabhugaonkar.
“There are also instances in the past in which the commuters have lost their lives due to the bovines squatting on the middle of the road; it’s in the best interest of everyone to go for a solution in which the animals can live safely, and the commuters can travel safely as well” opined Prabhugaonkar.