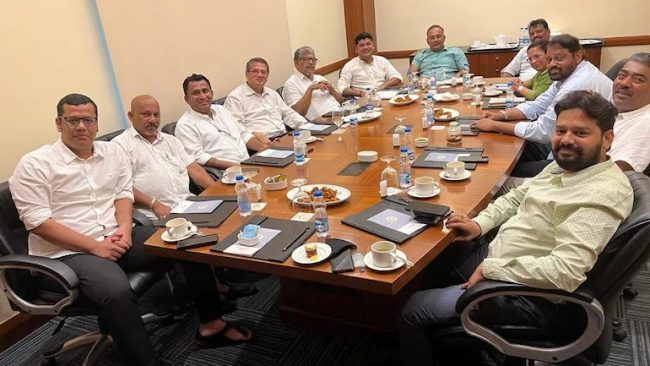 PANAJI: Days after political turmoil in Congress, the party’s high command has summoned 5 MLAs to Chennai.
The five MLAs, Sankalp Amonkar, Yuri Alemao, Rudolfo Fernandes, Altone Dcosta and Carlos Ferreira, flew to Chennai, this morning.
Michael Lobo and Digambar Kamat are still in Goa along with Aleixo Sequeira, Kedar Naik, Rajesh Faldesai and Delilah Lobo .
As per the sources, this move has been made to keep the flock together, and the MLA is expected to meet party higher-ups.
The MLAs will fly back to Goa on Monday to attend the ongoing assembly session and President’s election.
Congress also sacked Michael Lobo as the Leader of Opposition in the Goa Assembly for alleged conspiracy to engineer defections. Congress said that the BJP trying for a 2/3rd split and offered huge amounts of money to party legislators.
Earlier, Congress MLA Sankalp Amonkar had said, “It’s a murder of democracy. BJP govt wants to finish opposition. They wanted 2/3 of our MLAs to merge with them, but our MLAs didn’t let it happen. We have a meeting now to choose a new CLP leader. As of now, all 11 MLAs are in Congress.”