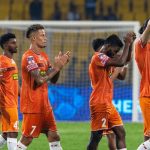 PANAJI: FC Goa may have suffered an unlikely defeat earlier this week at the hands of Bengaluru FC – but the Gaurs will look to put it behind them and bounce back on Thursday, when they lock horns with league-leaders Mumbai City FC at the Mumbai Football Arena.

Currently fifth on the table with 12 points, a win will help Carlos Pena’s men climb to third place. That said, it will not be an easy task to take home all three points against the Islanders, who remain the only unbeaten side in the ISL this season, topping the table with 18 points.

The two teams head into this one on the back of contrasting fortunes, heading into the upcoming clash. While FC Goa have lost two out of their last three matches, Mumbai are on a three-game winning streak.

As a result, the Men in Orange will approach the Islanders with caution, but with full belief in their abilities of beating the best in the league on their day. On the other hand, the latter will be brimming with confidence as they look for their fourth win on the bounce.

FC Goa head coach Carlos Pena spoke on the importance of playing without fear and having the right mentality as a football team, ahead of Thursday night’s clash.

“You cannot play football with fear. It’s a game – you may win, lose or draw – but if you play with fear, you’re not going to enjoy the game and give your 100%. I think we have shown that we can stick to our style and identity regardless of our opposition, and let’s see who can take the better advantage of their chances,” he said at the pre-match press conference.

“Mentality is a key aspect for top teams. We had a good start to this season, as compared to last year when the team finished ninth. We see that as a big positive, something which we want to build upon.

“There’s no doubt in the fact that the fight for playoff spots this season will go down to the wire. The ISL is a league where performances on the pitch are not what just matters – how you feel on and off the pitch is also important, as that sets the tone for how you play.