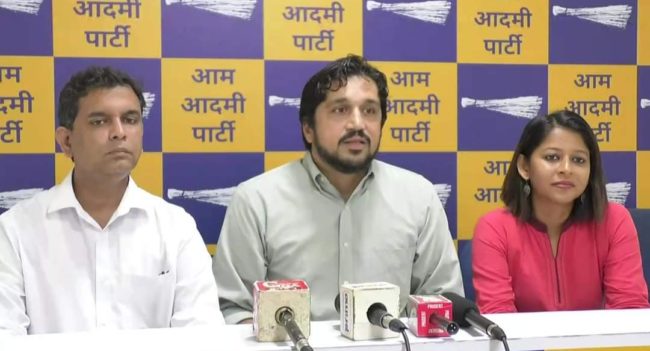 Ahead of the upcoming assembly elections in the state, the Aam Adami Party has announced ‘Parivartan Yatra’, a new campaign, further looking forward to flagging the party’s election campaign in the state.

While addressing the media on Thursday, Valmiki Naik, vice president of AAP said, ‘’as part of this Parivartan Yatra, party leaders will organise Panchayatwise sabha in every constituency; where leaders will create awareness on the schemes and guarantees announced by AAP and Kejriwal model’’.

‘’The party will kick-start this campaign from Calangute, Veli and Dabolim from Friday and will cover three constituencies daily. AAP is planning to conduct around 300 meetings in the state, ahead of the upcoming polls’’, he added.

‘’The BJP and its B party Congress is nervous after looking at the responses that AAP got from the Goans. While BJP and Congress are busy with pre-election setups, AAP is talking the sense and meeting people to understand their problems and working towards that to find a solution. On the other hand the local BJP leaders are unable to handle their campaigns in the state. Therefore, the high command of BJP is sending the national leaders in the state. The national team has been receiving the report from Goa and now they have realised that the BJP will lose the battle, in the upcoming elections’’, Naik said.

The AAP has been campaigning for one and half years and recently the party launched a door-to-door campaign. We have been seeing that now people are changing their mind and they think AAP is the only alternative. They have realised that Goa needs honest governance and only AAP can provide that.

AAP leader Amit Palekar said, ‘’These sabhas are organised to connect with common people. Common people like us were never in politics but seeing the state’s condition so many of them joined AAP and pledged to bring a change in the state.

BJP’s 22-point vision for Goa is a manifesto of scams: Adv. Amit Palekar

Congress to hold protest on the rising prices on Nov 3: Chidambaram

Goemkarponn desk PANAJI: The Goa Pradesh Congress Committee (GPCC) has organised a mega demonstration against the price rise in Mapusa on November 3- on Diwali. ... Read More