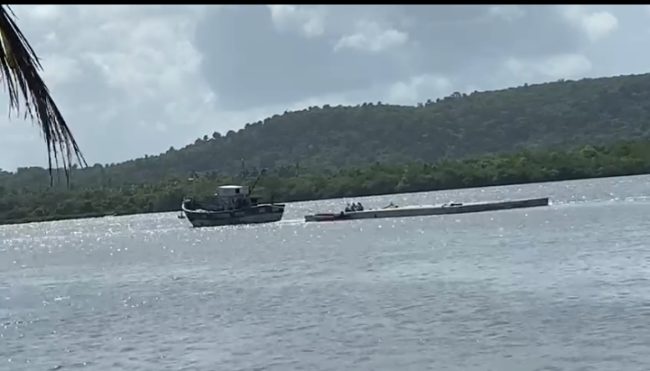 Goemkarponn desk
SIOLIM: The controversial floating jetty, which has evoked large scale protests at Chopdem, has finally been temporarily shifted to Camurlim.
The controversial floating jetty anchored under the Siolim-Chodpem bridge was finally removed from there. The boat was tied up around 9.30 am on Friday and taken to Camurlim.
Sources said this is just a temporary arrangement, the jetty will be taken to some other place thereafter.
Ports Minister Michael Lobo assured the Agarwada-Chopdem locals to move the floating jetty out from Chapora river if the locals desire so.
Villagers and fisherman from Agarwada-Chopdem village, headed by ZP member Satish Shetgaonkar and Ex ZP Member Deepak Kalangutkar, met the minister for Captain of Ports Michael Lobo and requested to change the plan of having floating jetty at Chopdem.
In a written memorandum villagers said that this move of the government will destroy the livelihood of the locals along the Chapora river side.
They stated that Chapora river is main source of income for the fishing community and youths of Mandrem Constituency and if the floating jetty is installed, then it’s going to affect the movement of vessels in the river especially the fishing boats and travelers.
They claimed that the floating jetty once installed will result in movement of speedy boats specially by the North Indians who have acquired property along the chapora river bank.
Delegation also highlighted that there are several salt pans located along the river in Agarwada Village and expressed concern over impact of polluted water on salt pans. They highlighted that several villagers are dependent completely on the salt pans as source of income. So if the movement of traffic in river increases, it would pollute the water and thus impact on salt pans.
After giving a patient hearing to locals, Lobo assured to move jetty out of Chapora river.