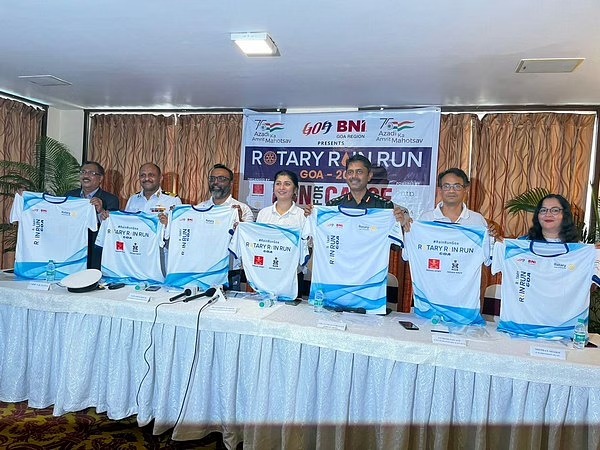 Goemkarponn desk
BAMBOLIM: The Rotary Club of Porvorim on Sunday organised the 8th edition of the Rotary Rain Run (RRR), at the Sports Authority of Goa’s (SAG) athletic stadium in Goa’s Bambolim on Sunday.
For the rain marathon, the two Signal Training Centres (STC) of the Indian Army and the Goa Naval Area of the Indian Navy joined hands with the Rotary Club of Porvorim in organising the 8th Goa Tourism-BNI Rotary Rain Run 2022.
Avinash Parmar, the chairman, of Rotary Rain Run, said at the closing ceremony that the event received a very good response from Goans and other pan-Indian athletes. Besides runners from the army, navy and a small team of runners from Bangladesh.
Jaspal Singh, Director General Of Police (DGP), Goa and a few others graced the event with their presence.
The event which is being organized to commemorate “Azadi ka Amrit Mahotsav” will see Goa Tourism and the BNI, Goa region as the title sponsors.
Earlier, Avinash Parmar said in a media conference, “It is a proud moment for us to have the army and the navy help us organize the event, even as we celebrate the 75th year of India’s independence. The army and navy provide excellent logistical solutions which help in making the event better,” Parmar said.
The media conference was attended by Dr Sandhya Kadam, President, Rotary Club of Porvorim, Girish Sawant, co-chairman, Rotary Rain Run, Colonel Pankaj Narayan of 2 STC, Commodore VK Gupta of Goa Naval Area, Rajkumar Kamat, executive director, BNI Goa region and Stephan Sheikh, chairperson, Prakash Cancer Aid Project (PCAP).
According to Parmar, the Rotary Rain Run (RRR) was an important fund-raising activity, where the proceeds saved from the event went back to society under the aegis of the ‘Prakash Cancer Aid Project’ which worked for women’s health and education. Parmar thanked Goa Tourism and the BNI for their active support.
The brand ambassadors for the event this year are Pradeep Kumbhar, a blade runner from Mumbai, and Mariola Mathias, a cancer survivor from Panaji. (ANI)