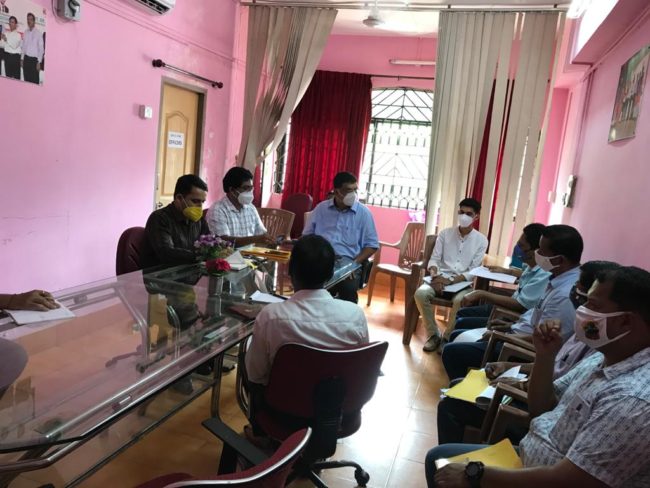 BICHOLIM: In view of the upcoming monsoon season the Bicholim deputy collector today directed the WRD to complete all the desiltiing work of nullahas to avoid flood like situation in the city.

A meeting in respect of monsoon preparedness was today convened by the deputy collector, Deepak Vaigankar under the able guidance of the Bicholim MLA and speaker, Rajesh Patnekar.

The Mamlatdar of Bicholim Taluka, Pravinjay Pandit took review of desilting works of nullahs undertaken by WRD. They were directed to complete the said task by the end of this month.

The WRD assistant engineer, K P Naik stated that the desilting works of nullahs are in progress and the same will be completed by the end of May.

During the meeting, directions were issued to the Assistant Engineer PWD roads Bicholim to clear debris adjacent to major District roads before the onset of monsoon and also arrange a JCB round a clock to assist the officials of Fire and Emergency services to clear the trees which collapse on the roads etc.

The Junior Enginner Electricity department stated they have Commenced the said work and it will be completed by 31st May 2021.

The deputy collector directed the municipal officials and Panchayat authorities to complete the pre-monsoon works before the onset of monsoons and also directed them to constitute Municipal level task force to assist the Disaster Management Authority during Natural disasters.

The staff of local bodies stated that they have Commenced the pre-monsoon works and it will be completed by 30th May 2021.

The Deputy Collector also directed the Fire Officer to purchase additional electric cutters which will come in handy during natural calamities.