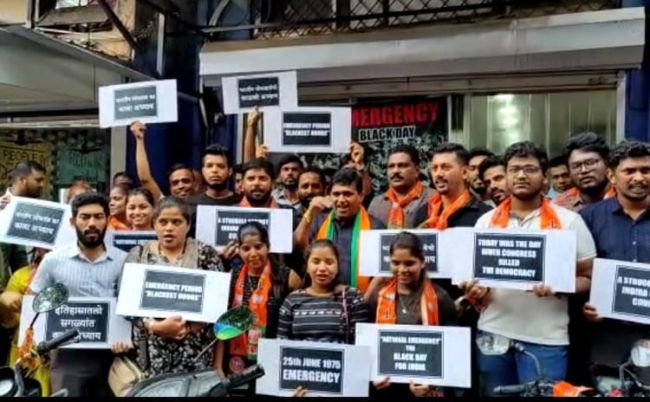 VASCO: Bharatiya Janata Yuva Morcha Vasco organised a rally to observe a black day in the history of Indian politics as 46 years ago, on 25 June 1975, the then Prime Minister Indira Gandhi imposed an Emergency in India.
BJYM Vasco did a bitter reminder of the yesteryears Emergency imposed by Prime Minister Indira Gandhi in 1975, which curtailed the freedom of speech and expression of the citizens of India for 21 months, said Vasco MLA Krishna Salkar.
He said the Congress party has a history wherein a decision of Emergency was imposed by the late PM Indira Gandhi, which took away the freedom from the journalists, opposition and general public in 1975. Whoever would talk against the Congress government was sent to jail and punished, which was undemocratic.
Salkar further opined that the Congress party is on the verge of extinction, and some so called Congress leaders from Vasco tend to question and obstruct the development that the BJP government is carrying out. These are not the original volunteers like the BJP party has; the Congress party import businessman and makes them the leader of their party. In fact today, the Congress party should have taken a press conference and should explain to the people why the Congress government at that time imposed an Emergency and troubled people.