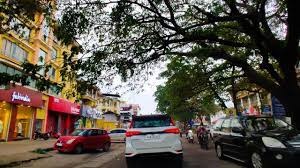 Goemkarponn desk
PORVORIM: Just when the businesses are limping back to normalcy and started recovering from losses after the COVID19 pandemic, the Government of Goa seems to be back in action, putting the firms on the back foot again.
Around 20 to 30 businessmen from CHOGM road Porvorim have expressed their displeasure over the government’s planned move to notify the famous CHOGM road as a no parking zone.
They said they would meet the local MLA Kedar Naik, Leader of Opposition Michael Lobo and Chief Minister Dr Pramod Sawant to get the plans cancelled.
Sources said this is being done due to frequent traffic jams on the road.
A PWD engineer official, speaking on condition of anonymity, said that the department plans to put a divider and widen the road.
However, the businessmen feel this will hurt them badly.
“Who will come here if the people are not allowed to park on both sides of the road?” asked one businessman.
He said they have faced huge losses in the last two years.
“We have just started restoring parity, but this government does not want businesses to do well. How are we supposed to pay taxes, salaries and survive?” asked another businessman.
He said that the authorities have to make proper provisions for parking first before going ahead with these destructive plans.
Agreed, said another businessman, there is congestion sometimes but that can be solved by traffic police.
“Why not station a traffic police team here? Anyways they are standing a few meters away just to challan the innocent people. Why can’t they help in free-flow of the traffic,” he said.
The business establishments have increased on CHOGM road as it is the gateway to the North Goa tourism circuit, with several branded outlets setting up shop there.

ED conducts search under PMLA on premises of Agnelo C. Lobo & others in relation to Land Grab Scam case of Communidade of Serula

No industries in Goa would shut down due to shortage of power supply: Dhavalikar

Goemkarponn desk VASCO: Vasco MLA Krishna Salkar, along with the Vasco BJP Mandal members, went on to collect soil from the vicinity of the worship ... Read More