* NSUI says only a few colleges; Results not declared online 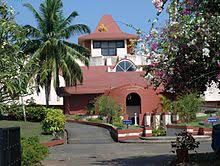 Goemkarponn desk
PANAJI: After much delay, the Goa University (GU) said it has finally declared the final year results. However, the National Students Union of India (NSUI) has claimed that only a few results of institutions have been declared.
Goa Forward Students wing, ABVP and NSUi had earlier petitioned Goa University Registrar regarding a delay in declaring results and had threatened to approach High Court.
According to information, the mark sheets of the candidates of some schools have been sent to the respective institutions, while the result has not been declared online. Also, the results of the majority of colleges had not been declared.
Students were seen in a state of panic with them, not getting a glimpse of their results.
Initially, the result was to be declared on August 5 but was delayed till August 18 for unknown reasons.
“Goa University has declared the results of only a few UG colleges, Results of majority colleges are still not declared and with no mark sheets it is of no use for students for job purpose and for higher education admission,” said NSUI President Naushad Chaudhary.
He further demanded that results should be declared in all the colleges along with Marksheets.
The students blamed the Goa University mechanism and said they could not apply for higher education due to the non-declaration of results.
“The admissions for higher education have already begun, but we could not apply due to non-declaration of results,” the students had said
The university spent around Rs 8 crore to set up the system, but a malfunction has repeatedly been causing delays.
“Goa Forward Students Wing Convenor Uddesh Naik Dessai said that finally, justice has been done and that his party and Vijai Sardesai will always stand with the student community.