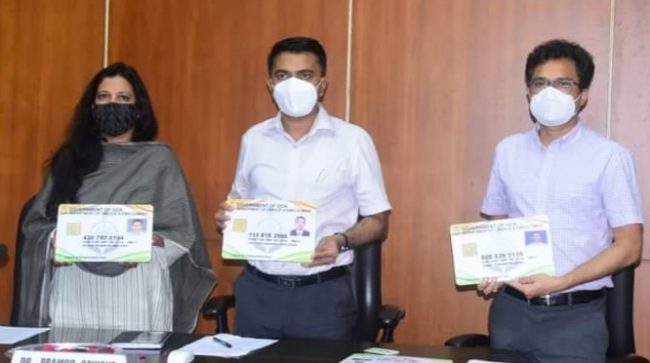 Panaji: The Chief Minister Dr. Pramod Sawant has said that the Government for the first time in Goa has endeavoured to provide Smart Labour Cards to the employees of organized and unorganized sector for their safety and welfare.

The Chief Minister was speaking after launching Smart Labour Card facility in the state of Goa at Secretariat Porvorim today. The function was organized by the office of Commissioner for Labour & Employment.

The Chief Minister said that all the schemes and policies of the Government in the Labour & Employment sector will be linked to the Smart Labour Card. Introducing Smart Labour Card will also help the state Government to make any policy and making decision about various labour and employment aspects in the state. He congratulated the labour Department of Labour & Employment for their endeavour for introducing Smart Labour Card in the interest of Labour. The Department have prepared around 9500 cards in its first attempt and remaining would be done soon he added.

Smt Monserrate also said that this card has been facilitated by the Government of Goa under the Goa Employment and Retirement Benefit Act 2001 for the welfare, safety, security, education and protection of labour. This card will serve as an online resume which can be used for availing Government jobs and using the same in any job fairs held across the state of Goa she informed

Commissioner for Labour & Employment Raju Gawas in his welcome address said that Smart Labour Card is an online provision and has been introduced on state service deliver portal. This initiative of the Government will help to facilitate the registration of employees of all the organization through bulk upload or individual upload mode along with online payment facility.

Secretary for Revenue Sanjay Kumar IAS, Staff of Labour & Employment Department and GEL were among those who attended the function.