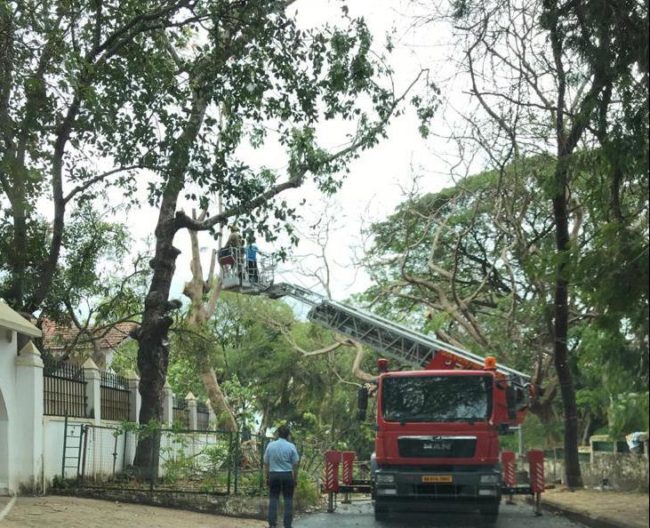 MARGAO: On one side common man in the entire state of Goa is facing the after effects of the cyclone with the trees uprooted, electricity poles still lying on houses here is how the authorities ignored the plight of the common man and VIPs are treated with red carpet.

Needless to say that people are unable to go into their own houses. In many places, the power lines are snapped and as the electric poles have fallen along with the huge trees and the people do not have power in their houses for sixthd ay in a row today after Cyclone Tauktae ransacked Goa.

Although the people expect their elected representatives to set all this right through their respective Panchayats and Municipalities, these bodies do not have the required equipment as well as trained manpower.

As such normally under disaster management, the services are rendered through the Fire and Emergency Service Department which is always at the rescue.

Probably for the first time the capital city of Panjim was very badly effected along with its neighbouring places like Taleigao, St.Cruz, Ribandar etc.

Inspite of the best efforts from the politicians from all these areas, even on the sixth day now there are lot of hurdles to be cleared and Fire Service department is unable to cater to that.

However, surprisingly there is work was carried out on war footings at the Chief Secretary’s residence, where whilst clearing the fallen tree, a huge tree which was not at all an obstruction, was cut down by using state of the art equipment, which have ‘never been used before’, sources said.

There were two fire brigades in action with almost 20 fire personnel, gang of tree cutters from CCP and four trucks with labourers to clear the thrash.

Not only the trees and thrash was cleared, but even the damaged compound wall has been reinstated. Probably to night it may also get painted.

Is this not a VVIP culture, when the common man is suffering?