Confident that BJP will win both LS seats in 2024: CM

Of 186 village panchayats, there will be BJP-backed sarpanchs in 140-150 panchayats, says Sawant 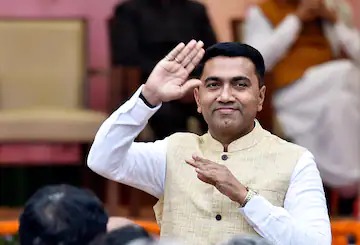 Goemkarponn desk
PANAJI: After a clean sweep in Panchayat Polls, Chief Minister Pramod Sawant said that he was confident that BJP will both the Lok Sabha seats in 2024.
“Of 186 village panchayats, there will be BJP-backed sarpanchs in 140-150 panchayats. In the other panchayats, too, BJP workers will be panch members. With the way we have won, I am confident that the BJP will win both the Lok Sabha seats in 2024,” said CM Sawant.
He further said that around 50 per cent of the elected candidates from the remaining panchayats are affiliated with the BJP.
“I request the newly elected panchayat members to work towards strengthening democracy,” he added.
The chief minister said that his government will categorise village panchayats into A, B, C and D groups and whichever panchayat is financially weak accordingly, the government will make arrangements to provide them financial support.
Meanwhile, the chief minister said that there is a need for reforms in the panchayats so that development reaches the last person of society.