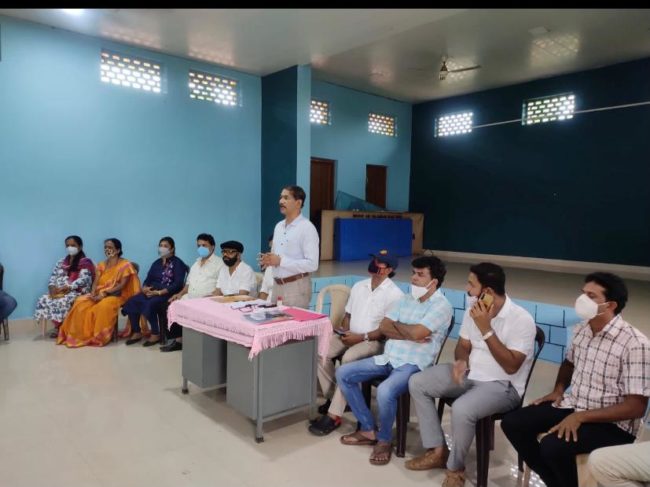 Goemkarponn desk
CANACONA
With elections a few months away, every political party in the state is trying to occupy the voters’ mind space. In a similar move, Congress party organized a meeting of its cadres on Saturday to motivate them to get election ready.
Girish Chodankar, the GPCC president, while addressing the taluka level Congress leaders, emphasized that the BJP came to power by threatening their MLAs. In fact the Goans had voted for the Congress party, Goans know that the Congress party has a long history and work of the betterment of people, but the BJP formed its government by betraying the trust of the people.
Congress Sate President Girish Chodankar expressed the view that a lesson must be learnt from past experiences.
Ten MLAs, who were elected on the Congress party ticket joined the BJP, the reason they mentioned was the development of their constituencies, but in reality, they have not done any developmental work, Chodankar said.
During the Covid-19 epidemic, the death toll in Goa mounted due to lack of government planning and differences between Chief Minister Pramod Sawant and Health Minister Vishwajit Rane he said.
Congress state general secretary Janardhan Bhandari said that despite the change of party in the name of development, no development has occurred in Canacona.
If we look at the history of the last twenty years, the three MLAs during that period have not done any development. On the contrary, their politics has left Canacona behind, said Daya Pagi, former ZP member.
“The BJP has a knack for convincing people in the name of development, and they go to any lengths to come to power. To this day, the BJP party has ruined the state of Goa by resorting to all such means”.
“We are now preparing for the coming elections,” said Yuri Alemao.
“The Congress party has never has indulged in cheap politics, but the BJP has used caste politics to divide and rule,” said Canacona taluka congress president Pralay Bhagat.
During the floods in Goa a few days ago, many parts of North Goa were flooded, but a BJP Union Minister came to Goa and visited many tourist places but didn’t feel necessary to visit flood-affected villages, said Pallavi Bhagat a state level Congress leader.
Those present for the taluka level block meeting were
General Secretary of South Goa Siddharth Naik, former Sarpanch of Gaondogari Rajendra Velip, Executive Secretary Mahadev Desai, representative of Pagi community Ajay Pagi, Uday Gaonkar, Rajesh Velip, Panch members Ramu Naik, Dayanand Desai, Champa Pagi, Manisha Bhandari, Urmila D’ Costa, Quincy Fernandes and Miltia Fernandes.