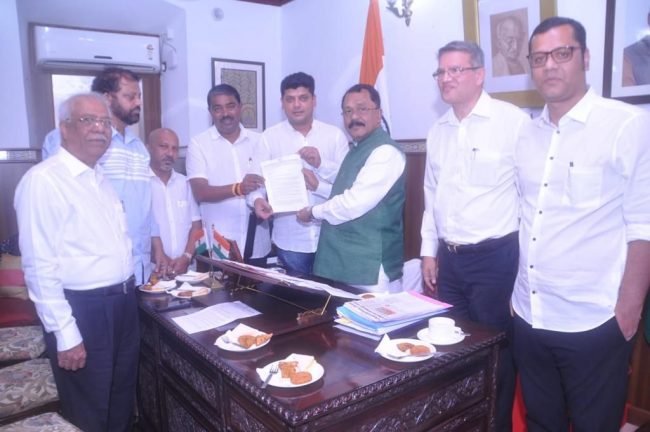 Panaji : Congress Party today called on the Governor of Goa Shri. P.S. Sreedharan Pillai and submitted a memorandum on issues of utmost importance ignored & sidelined by the BJP Government. Congress Party has demanded visit of the Governor to inspect Illegal Bandhara Construction Sites on River Mhadei, Dismissal of Ex-Civil Supplies Minister for Toor Dal Wastage and White Paper on Employment Scenario in Goa.

The memorandum states that there is fear, anxiety and concern in the minds of the People of Goa about the failure of the Government to take proactive steps to protect River Mhadei, Stop Wastage of Food items and Provide Employment Opportunities for the educated youths in Goa.

The Memorandum further highlights the illegal construction of Bandharas to divert water from Mhadei Basin by Karnataka and the inaction of the Government of Goa. It further states that the people of Goa have a right to know the exact status of the work carried out by Karnataka on Mhadei River.

Congress Party in its Memorandum has demanded a High-Level Inquiry under the Supervision of High Court Judge on wastage of 242 MT of Toor Dal & 10.3 MT of Sugar and has also asked for immediate removal of former Civil Supplies Minister and the Officials responsible for the Criminal Wastage of Toor Dal & Sugar from Government Godowns.

Referring to various reports indicating high unemployment rate in Goa and the misleading and misguiding statements by the Chief Minister of promising lakhs of jobs which has resulted in various youths going into depression, the Memorandum has pointed that the level of frustration is rising alarmingly among the educated youths who are now getting attracted towards drug addiction and other vices.

The Congress Party has demanded that the Government must release a “White Paper” on the Employment Scenario in Goa giving true facts & figures. They have also urged the Governor to direct the Government to take up recruitment process through Staff Selection Commission.

We request your immediate intervention and action on all the above three issues which are of utmost importance and issue necessary directions to the Government immediately, states the Memorandum.